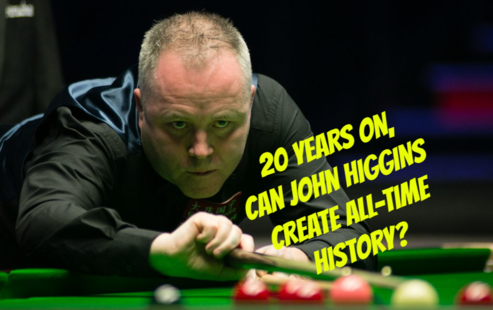 Higgins has already guaranteed his greatness within the sport, even if he were never to pot another ball again. A component of the 'Class of 92', his longevity on the very top tier is remarkable.

In the modern era, Higgins already holds the record for the longest time span between his first and last World Titles, but should he be victorious again come May Bank Holiday Monday, he would smash that record with his maiden Crucible success back in 1998 – 20 years ago.

It also means that the 42-year-old has won it in three different decades. Six-Times winners Ray Reardon and Steve Davis, as well as Seven-Times winner Stephen Hendry, all secured theirs within the same decade.

Looking back at the all-time history of the World Championship, the only other player to win the title in three separate decades was Joe Davis during the 1920's, 30's and 40's.

'The Grandfather of Snooker', Davis was an undefeated 15-times World Champion. With his first being at the maiden World Championship in 1927, and his last being in 1946 (he then retired from the tournament after this point), his span is 19 years, meaning Higgins would break the all-time record if he gets his fifth in a couple of weeks time.