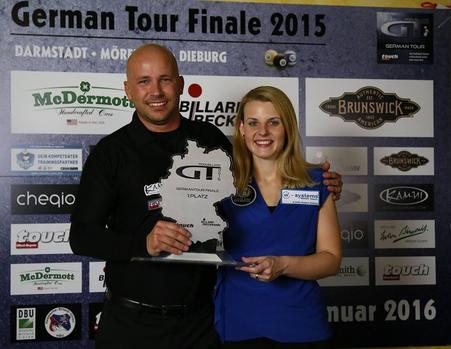 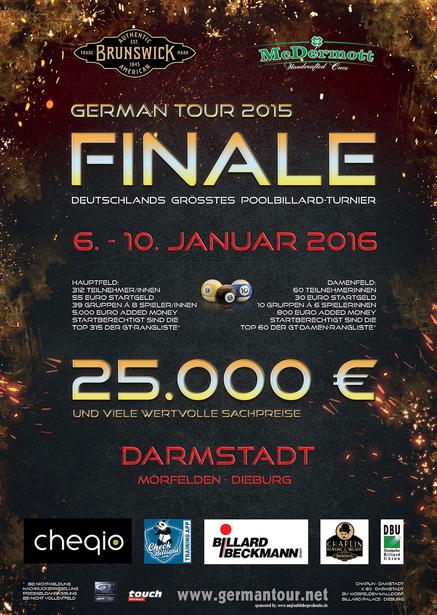 ​  HYBLER AND KAPLAN ARE THE LAST STANDING

Over 300 qualifiers and selected wildcards took part in the end of year German Pool Tour Grand Finals. It was the culmination of the best from a number of ranking events throughout the past 12 months. There were 'Open' and 'Womens' sections.

Among the special invited guests were Nick Van Den Berg, Tony Drago and Filipino Pool legends Efren Reyes and Francisco Bustamante, who were in Germany for an exhibition style tour after Christmas. In fact, Bustamante ended up playing, and beating, Reyes in the Quarter-Finals here.

The finals had the unique set-up of being partially played over three separate venues, and with an alternate format between 8,9 and 10 Ball (the last knockouts were played to 8 Ball).

It would be Munich based Czech Republic cueist Roman Hybler who took the honours in the Open Division.

Apart from a hill-hill clash with fellow countryman Michal Gavenciak in the Last 8, Hybler didn't drop more than 4 racks in any of his Last 64 KO matches onwards.

Can Salim (Germany) and Bustamante were the losing semi-finalists.

In the Women's Division, Ina Kaplan beat Jennifer Vietz 5-0 in an all German Final. ​Kaplan had also finished joint 17th in the Open competition.

Many thanks to the Touch German Pool Tour for the above pictures!

Written and published by Michael Day on the 17th January 2016