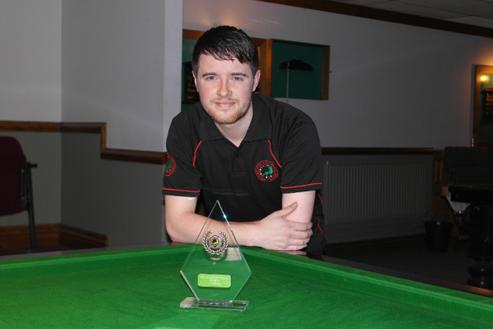 ​Dale Branton from Plymouth and Harvey Chandler from Rushden fought out a closely contested final at Jesters Snooker Hall, Swindon.

The tournament was event four of the West of England Billiards & Snooker Foundation (WEBSF) Gold Waistcoat Snooker tour. Branton took an early lead with some excellent matchplay snooker only for Chandler to match this and draw level setting up a tense decider. After a finely balanced frame leading into colours, Chandler had Branton in all sorts of trouble and looked favourite to win. He skilfully snookered Branton with only pink and black remaining. Branton made his escape at the second attempt and was fortunate to leave the balls reasonably safe. Chandler replied with another good safety shot only for Branton to pull out an excellent pot on the pink followed by an audacious shot off the top cushion that saw the black double into the bottom yellow pocket to take the frame, match and the lions share of the prize money.

As a result of getting through to the final both players jump up the rankings; Branton from fourteenth to fifth and Chandler, having only played in two of the four events, moves up eighteen places into eighteenth position. Mitch Grinsted also creeps into the top sixteen from twenty second to fifthteenth place. With just two events remaining to find this seasons overall tour champion, Plymouth based Haydon Pinhey moves into top position, closely followed by Andy Symons (Tavistock). The top sixteen positioned players at the end of the six events will be invited to play in WEBSF Gold Waistcoat Masters for prize money in excess of £1300, main sponsor M.J.H. Devon Paving Ltd..

The remaining qualifiers from the group stages comprised of losing semi-finalist Grinsted (Plymouth) and Ian Preece (Newport) and quarter finalists; Symons, Callum Lloyd (Newport), Nick Hawkins (Bristol) and Pinhey. There was a barrage of breaks leading up to the final with three players making century’s; Precocious talent, Ben Fortey (Hereford) got the balls rolling with an early 102; prolific break builder Eddie Manning (Newquay) capped a flurry of breaks with a 105 and Preece notched several that included 105, 106 and the best on the day a 111.

WEBSF spokesman said, “A great day of snooker has been had here at Jesters today, each player has played at least fourteen frames and some as many as twenty-two. Six new players have come to the tour, all of whom have competed well and enjoyed the experience. We have seen five century breaks with a further forty-nine over 50 and a shuffle of the top sixteen places in the ranking. All bodes well for an interesting final two events and a hotly contested Masters to finish the season.”

Any player interested in entering WEBSF events should contact Steve Canniford, Mobile 07891940995 or visit http://www.websfsnooker.com or WEBSF Facebook. Thanks to Brad and his staff at Jesters Snooker Hall, Swindon who sponsored this event.

For more information on this event, and the hard working WEBSF as a whole, please visit their website here.
​​​​