​​Players from around the region and beyond descended on the 147 Snooker Club, Swindon to complete in the penultimate West of England Gold Waistcoat Snooker Tour event of the season.

The result was that Haydon Pinhey from Plymouth put himself in prime spot to become the Overall Tour Champion after beating Eddie Manning (Newquay) in the final. With frames levelled, it was Pinhey that rallied in the decider to make a 58 break to win and take the trophy and the lion share of the prize money.

Assuming a full house in the final event, and Pinhey makes the cut, he should become the overall champion. However, if he falls short, Andy Symons (Tavistock) and Manning will both be in with a chance to snatch this prestigious title. Andy Neck’s (Newton Abbot) chances are slim but a third title is mathematically possible if he were to win the last event and the other three players mentioned did not enter.

Both Manning and Pinhey kept clean sheets in the semi-final against Symons and Harvey Chandler (68 break) respectively, Pinhey making a 68 break.

Losing quarter-finalists were; father and son Mark & Dan Legassick, Steve Brookshaw (50 break) all from Plymouth and Steve Downing from Redruth. Downing was involved in a superb break building contest with Manning. The former making a solid 54 break and the latter, 45 and 108 breaks.

Group A produced the only undefeated player in the groups, Manning forged six perfect wins from six matches and posted breaks of 50,53,55,55,76,77 & 98 for good measure. Event 4 winner Paul Standen posted breaks of 66 and 55 and Legassick Snr 45.

Groups C and D produced fewer breaks but was none the less competitive with close finishes to decide the qualifiers. The best break coming from Mitch Grinsted 71.

Where as Pinhey and Co. are fighting it out for the overall title another tussle is taking place between those vying to finish in the top sixteen. The prize being qualification for the WEBSF Gold Masters, sponsored by M.J.H. Devon Paving Ltd., and the opportunity to compete for a share of £1300 prize money this coming May. Hassan Vaizie (Gloucester), Matt Hulatt (Uffculme) & Steve Downing, (Redruth) can all edge their way into the elite top sixteen.

International Referee Nick Harry was on duty throughout the long day keeping an expert eye on preceding’s.

WEBSF spokesman said, “Another tough day of competition between some of the best players in the region produced some excellent snooker. Newbies to the tour, Stuart Watson and David Brown played some excellent snooker that included a quality break of 122 from Watson. We hope to see them compete on the tour again. With three players vying for the overall title and a further three for a place in the top sixteen, the last event at The ‘Q’ Club, Gloucester in April promises to be an exciting affair.”

Any player interested in entering WEBSF events should contact Steve Canniford, Mobile 07891940995 or visit http://www.websfsnooker.com or WEBSF Facebook. Thanks to Noel and his family at the 147 Club, Swindon who sponsored this event.

​​For more information on this event, and the hard working WEBSF as a whole, please visit their website here. 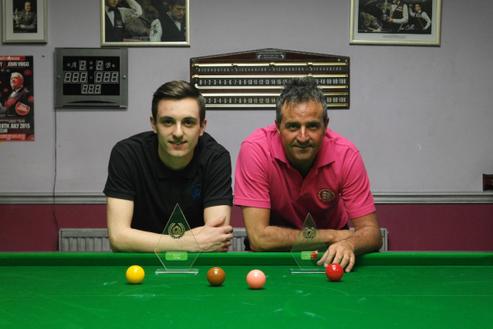