MANNING ON FIRE AS PINHEY TAKES THE TITLE

Eddie Manning (above, left) from Newquay, Andy Symons from Tavistock and Haydon Pinhey from Plymouth where all in the hunt for the title. Pinhey was in prime position but he was the first to falter losing in the last 16 to Callum Lloyd (above, right) from Wales, this took Pinhey to 252 ranking points. This ruled out Manning who could only draw level but would come second due to Pinhey winning more events. However, this left the door open for Symons to steel the title if he could only win the event.

In the quarter finals Symons edged out Stuart Watson from the Midlands in a quality encounter to book a place in the semi-final against Manning. Manning had been posting a barrage of breaks throughout the day and was clearly focussed on wining the event.

Symons put up a good fight but Manning won the deciding frame to reach the final and hand Pinhey the title.

Whilst all this was happening in the bottom half of the draw, Callum Lloyd was making excellent progress in the top half. After beating Wayne Branton from Plymouth in the last 16 he edged out Darran Lock from Cornwall with the aid of a 101 break.

In the semi-final he met Hamim Hussain from Birmingham who has recently won his fourth English Junior title, Lloyd won comfortably. However, Hussain is certainly one to watch in the future.

The final was a one sided affair with Manning in full flow posting breaks of 94 and 66 to clinch the final event of the season.

Pinhey joins an elite group of players to have won this title that includes professional Sam Baird from Devon who has just qualified for the World Championship finals for the second time.

The groups finished before the cut-off time which meant sixteen rather than the usual eight players would qualify for the knock-out stage. This was attributed to the high standard of break building on display. The best break of the day was posted by Pinhey a superb 131 clearance to which he added five breaks over 50.

Seven century breaks and seventy five breaks over fifty are records for a WEBSF tournament.

WEBSF spokesman said, “What we have seen here today is tantamount to the depth of talent we have entering our tournaments. A fantastic achievement for Haydon Pinhey who was taken to the wire by Andy Symons and Eddie Manning. The quality of break building, especially Eddie Manning, was awesome".

"The top sixteen ranked players will now meet on the 28th of May to compete for the Gold Masters title at The Galaxy Centre, Torquay for a total prize fund of £1320 sponsored by MJH Paving Ltd. and the hosted. A mouth-watering prospect for anyone that enjoys quality snooker.”

Any player interested in entering WEBSF events should contact Steve Canniford, Mobile 07891940995 or visit http://www.websfsnooker.com orWEBSF Facebook. Thanks to Dawn and her staff at Top Q Snooker Club, Gloucester who sponsored this event. 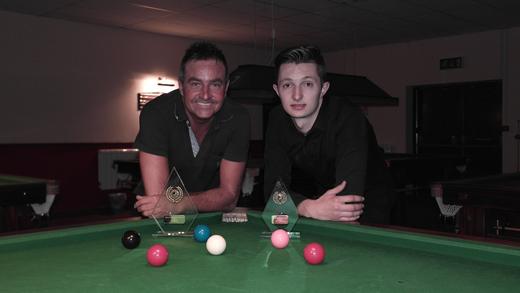