Shane Van Boening rounded off his year with victory at the high profile 2015 Accu-Stats Make It Happen 10 Ball Invitational in New Jersey.

This special six player invitational event bought together international champions from the past and present. Playing each other in a round robin format with races to 13, the top two after all the matches were completed then played off for the championship title.

Day 1 started off with a bang, bringing together different generations in the shape of the mercurial Earl Strickland and relative ‘new kid on the block’ Jayson Shaw, who has been on a terrifying run in the States for the past 12 months.

Strickland would end the opening day 0 out of 2 after losing 13-6 to Van Boening; SVB’s second consecutive win after dispatching reigning US Open 9 Ball Champion Kevin Cheng earlier on.

Chinese Taipei’s Cheng would open his account on Day 2 with a fine 13-7 success against Thorsten Hohmann, but ended the day succumbing to Strickland by the same scoreline; ‘The Pearl’ fighting back with his first victory.

Whilst everyone else had now at least registered a win, Darren Appleton was surprisingly struggling and found himself firmly rooted to the foot of the table without a win. Defeat to Cheng (13-6) eliminated him from the qualification stakes, and then he would suffer a 13-1 mauling to a resurgent Strickland, who gave himself a feint hope of appearing in the final.

Multi-time World Champion Hohmann was typically coming under the radar, chalking up success against Appleton and Van Boening in the process.

Going into the last day, five of the six players (minus Darren) could mathematically make the final, although it was realistically it was two out of Shaw, Van Boening and Hohmann.

Hohmann did what he needed to do in an impressive 13-5 defeat of Strickland, but his qualification fate would ultimately lie in other people’s hands.

Next up, Appleton restored some pride with a morale boosting 13-12 victory over familiar rival SVB. However, the 12 racks Shane picked up in losing meant he was now guaranteed a play-off position regardless.

The 15th and final group fixture featured Shaw and Cheng.

Shaw needed to win to go through, whilst Hohmann was rooting for Cheng, as a win for the Asian would put the German in the Championship Tie. Cheng himself could no longer qualify.

Despite failing in the first rack, Shaw responded to the pressure with a tremendous display of 10 Ball in a resounding 13-3 win.

The Final was set to be a mouth-watering affair  between two of the hottest properties on planet pool.

Nothing separated the pair after 10 racks, with the score tied at 5 a piece.

A crucial psychological factor may have been the result of a cagey eleventh game, in which SVB masterminded a route through to edge in front 6-5.

This looked to be a catalyst for Shane, who then fashioned a clear advantage with three ‘Break and Runs’ on the spin.

An unexpected error cost Van Boening another B&R in the next (and the rack), although he instantly responded by claiming the following three to move on the hill.

Despite the barrage of clinical pool and a somewhat disheartening scoreline, Shaw remained resolute. He would then capitalise on mistakes from his opponent, and rally back to within touching distance at 12-10.

Now with a contest back on, Jayson made a ball off the break but would later scratch.

Surely now very nervous after seeing his lead being whittled down, Van Boening held himself together to clean up the remaining octet of balls, and take this prestigious title.

Individually, 2015 has been another superb year for America’s undisputed top player.

He became the first person in the 22 edition history of the World Pool Masters to retain the crown, and also scooped top honours in the Challenge of Champions and the 10 Ball Challenge at the Derby City Classic.

Shane was narrowly ousted into second place at the World 9 Ball Championship in Doha, Qatar (by surely player of the year Ko Pin Yi) and was on the winning ‘Team West’ at the inaugural Kings Cup in the Philippines.


Written and published by Michael Day on the 27th December 2015 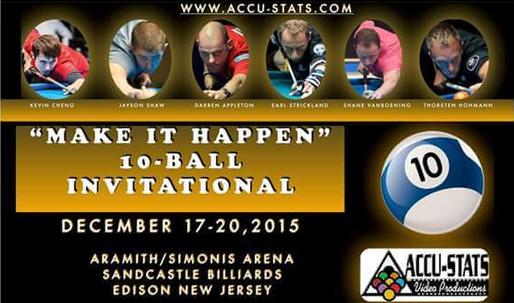