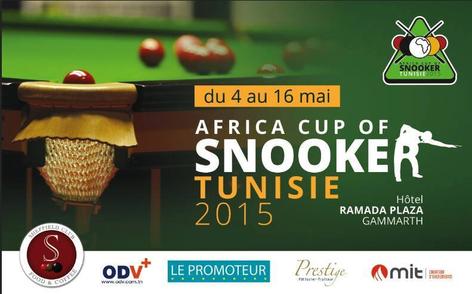 YASEEN IS CHAMPION OF AFRICA

Hatem Yaseen of Egypt is the 2015 African Snooker Champion, and now has the opportunity to turn professional after being awarded a World Snooker tour card for the next two seasons.

The Championships, which were sanctioned by the ABSF (African Billiards and Snooker Federation), were held in the north of the continent in Tunisia. The competition was made up of categories for Men, Women, Masters and 6 Reds.

In the Men’s section there were 56 entrants from 9 different nations - Algeria, Egypt, Libya, Morocco, Mozambique, South Africa, Sudan, Tanzania and the hosts Tunisia.

The hopefuls were split into groups of 4 for the opening part of the event, but there were no big name casualties when the format reached the knockouts. It was testament to the credibility and competitiveness of the field that 7 of those countries still had representation in the last 32.

The latter stages were dominated by Egyptian entrants; they made the entire semi-final line up.

Both last 4 matches were tight and went down to the wire. Yaseen beat former champion Wael Talaat - a player who has competed on the sports highest tier in years gone by.

Talaat also has the unique world record of making an 83 maximum break during the IBSF World 6 Reds Championship in his native home last year. His opponent, Milad Elabbar (Libya), failed to hit the reds on his break off and ended leaving a free ball, thus giving Talaat the chance for an extra 8 bonus points on top of the conventional 75. On a side note, Elabbar lost the match 4-0 and failed to score a point.

In the other last 4 clash, Mohamed Khairy ousted Mohamed Ibrahim. Khairy was the 2012 African nomination for the ProTour when he was runner-up to Francisco (who declined the invitation). However his two year spell was plagued with visa problems, and he only ended playing a handful of matches before being relegated at the first possible point.

Khairy would suffer heartbreak again in the final, as the match went to a deciding frame which Yaseen took to become the new African Snooker Champion.

It would be good for snooker if Yaseen could take full advantage of his newly found status, but he will probably encounter the familiar issues of travel and finance.

In years gone by South Africa had a strong foothold within the higher echelons of the sport, but their presence started to dwindle from the mid 90’s, and has never recovered.

During the event it was agreed that Tunisia would be hosts again next year, whilst Algeria will get the opportunity in 2017.

There was further success for Egypt in the Masters and 6 Red tournaments.

Walid Hamdy took the Masters title by coming through the group phase and KO sections.

In the final he beat Mozambique representative Ibrahim Ahmad 5-3.

Not only does he take the plaudits, but he also receives an entry to the World Masters which will be held in his home country come November.

The 6 reds were well supported with a healthy swell of numbers, but it was Ahmad Galal who would come through in the shorter length discipline.

He may have saved his best till last too, with clean sweeps of Kusai Sharif 5-0 in the semis and Peter Francisco 6-0 in the final.

Galal is also rewarded with the chance to play at the SangSom World 6 Red Championship in Thailand in September.