KEEPING IT IN THE PHILIPPINES

After a brace of gallant efforts in recent years, Johann Chua deservedly claimed the top honour in this year’s 48th All Japan Championship.

The 22 year old had previously reached the semi-finals here in 2012 and 2013, but this time went two steps further amongst a galaxy field of international champions past and present.

The rising star, another proud product of the Filipino pool system, manhandled some of the sport’s greats on route to the final.

Chua made his way to the Last 64 after going unbeaten during double elimination qualifying. Once in the knockouts, he enjoyed highlight wins over Ralf Souquet 11-2 (with the help of an incredible 8 Break & Runs), and then Shane Van Boening 11-6 at the semi-final stage.

SVB himself was looking unstoppable with relentless victories over former World Champions Alex Pagulayan and Francisco Bustamante earlier on.

However, Chua’s best achievement may have come in the final against fellow countryman, and another ex-World Champ, Ronato Alcano.

The 2006 ‘King of 9-Ball’ found his groove quickly, gaining a dominant looking 5-0 advantage in the title decider.

But Chua showed a mature aspect to his game, which justifies why he is such a potent threat for more future major championships like these. In a fantastic comeback, he dragged himself eventually level at 7-7, before kicking on to finish up a 11-7 victor - he had taken 11 out of 13 racks.

It means this WPA event once again belongs to the Philippines, with Chua following in the footsteps of 2014 winner Raymund Faraon. He took just under $15,000 for the success.

Written and published by Michael Day on the 24th November 2015 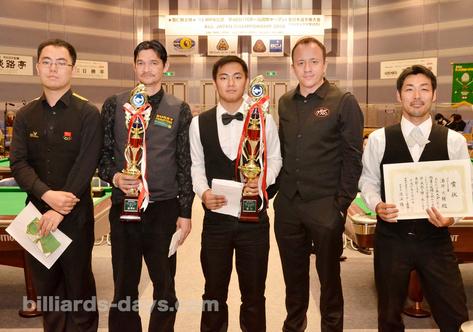