Representatives of nine different countries travelled to Malaysia for this invitational open event; but it was home player, Patrick Ooi, who would take the title.

The tournament was split into different stages, starting off with local qualifiers, and then the main stage round robin and knockout sections. All proceedings were sanctioned by the Malaysian Snooker and Billiards Federation.

The well decorated Ooi qualified through to the round of 32 when finishing third in Group E with 3 wins out of 5.

He then eliminated Pakistan’s Imtiaz Serwer 4-1, and Egypt’s Mohamed Khairy, the non-Asian entry, 5-3 in the Last 16.

With Thailand’s Aekravee Toon being dispatched at this stage too, it meant the Last 4 line-up was an all Malaysian lock out.

A comfortable 6-1 semi-final win over Moh Keen Hoo was followed up with a similar storyline in a 6-2 final defeat of Lim Kok Leong.

Ooi, who celebrated his 43rd birthday during the competition, took home the beautiful trophy and RM7,000 prize money.

There is a Facebook event page for the event here.


Written and published by Michael Day on the 3rd November 2015 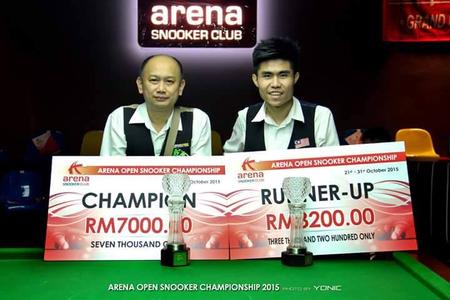