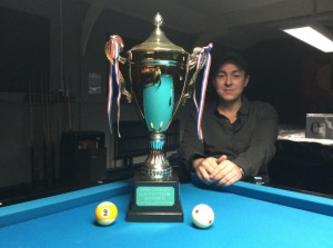 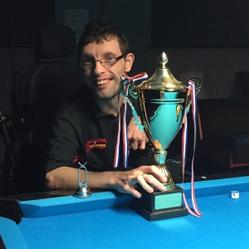 The curtain came down on another BWPPA season over the weekend of the 14/15 November 2015, with the Predator Cues British Wheelchair 9-ball Championship, which was held at the Wheelchair CueSports Academy at Stoke Mandeville near Aylesbury.

Going into the event, only Ireland’s Fred Dinsmore and Merseyside’s Tony Southern could end the season as the UK’s number 1 wheelchair pool player. Southern knew only a place in the main event final, and a slip up from Dinsmore would see him reach top spot in the rankings.

Southern’s campaign began well enough with a 7-3 win over Stoke’s Dave Beaumont, he followed this with a 7-2 win over Aslam Abubaker. That result also ended Abubaker’s hopes of finishing 2nd in the rankings. Unfortunately for Southern his hopes were dashed with a 7-4 defeat to BWPPA veteran Danny Luton in the semi-finals. He was 2-0 up, missed a long 9-ball to extend his lead, and from that miss, Luton gained the momentum to play almost flawless pool to reach his first final for a few seasons.

In the opposite side of the draw, the BWPPA welcomed Cristian Brownlee from London to his first event on the tour. Brownlee couldn’t have had a more difficult draw. He lost 7-0 to Dinsmore. The debutant then came through a 7-6 winner over BWPPA stalwart Nick Oliver, before losing 7-3 to Craig Welsh in the losers bracket. Brownlee certainly proved he is a player with a lot of potential, and we hope to see him return to the tour in 2016, and he commented after the event that he really enjoyed the experience.

Dinsmore followed his win over Brownlee with a clash against old foe Roy Kimberley, who at recent events has begun to shown signs of his old form returning. Kimberley sent the Irishman into the losers bracket with a 7-5 victory. In the losers side Dinsmore came up against Daniel Lee (top left), who had began his tournament with a 7-3 win over Luton, before losing 7-5 to Abubaker.

Lee proved too strong for Dinsmore, with a 7-2 win, after he had come through a tense 7-6 win over Beaumont. This meant that for only the second time in the last few years, Dinsmore didn’t make the semi-finals of the main event

In the semi-finals Lee brushed aside Kimberley with a 7-2 victory, meaning he was into his second final of the season after his run at the Simonis Northern 9-ball Open back in May, where he would face Luton.

The final proved to be another one-sided affair with Lee taking the title, beating Luton 7-3 to become the Predator British Wheelchair 9-ball Champion, and thus claim his first main event title on the BWPPA tour, and finish the season ranked #4. After the final Lee said “It was good to get my first win under my belt, I feel like I’ve got a monkey off my back now".

In the challenge event, players are handicapped based on their previous performances, and the impact their disability has on their pool playing ability. The ‘Doncaster Destroyer’ Matt Lester (top right) also won his first BWPPA event, as he defeated Dinsmore 5-3, Welsh 5-4 and Abubaker 5-3 in the final. After the final Lester said “It’s amazing to finally win a trophy on the tour after 8 years of trying. I couldn’t have done it without the support of Snooker Legends, George and everyone at Escape Pool Bar in Barnsley and my mum who drives me everywhere".

Lester is a credit to the sport of pool, and is the only player on the tour that has to play 1 handed due to this disability, but even with having a 2 start in his challenge matches, he pulled off a series of outstanding pots and performances, which must surely be in the minds of his fellow players, when they vote for their player of the season.

A video of the main event final will be available soon. Pictures of the event can be found in the BWPPA gallery.

The 2016 season will commence at the academy over the weekend of the 5/6 March 2016, where we will be introducing a new format, as well as a new entry fee format and prize fund breakdown.

The BWPPA are always looking for new members no matter what disability you have, or your level of ability in the sport. If you would like to be a part of Worlds’ largest wheelchair pool tour, please keep checking on www.bwppa.com. If you need any more encouragement to join the BWPPA, you could represent Great Britain in international tournaments, plus all new BWPPA players enter their first event for free!

If you are reading this and know of any players who may be interested please pass this onto them.

We also are always looking to expand the sponsorship side of the tour, so if you or your company would like to become one of our sponsors, please visit our contact us page.

thecueview would like to thank the BWPPA for their continued hard work!​​​