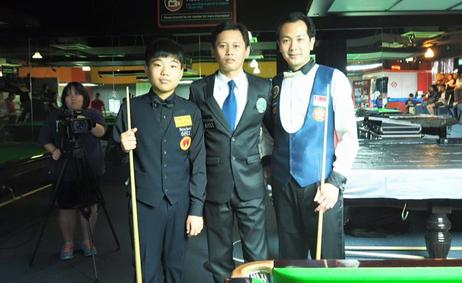 Some of Asia’s most promising and talented youngsters travelled for the main stages of the event, with representation from countries such as China, Thailand and Hong Kong.

However Lim, the experienced top seed, managed to get the better of his youthful opposition throughout the latter rounds.

He defeated the newly crowned IBSF World Under 18’s Champion Cheung Ka Wai 4-1 in the quarter-finals, and then survived a four hour slog with reigning Asian Under 21’s title holder Akani Songsermsawad.

The age gap between his peers was increased even more come the final, when he faced 14 year old Chinese prodigy Fan Zheng Yi.

Despite Fan taking an initial 2-0 lead, Lim’s significant knowledge and nous may have been the difference in a 5-3 recovery victory.

The success here puts Marvin in good stead for the upcoming IBSF World Amateur Championship in Egypt, for which he had already qualified for.


Written and published by Michael Day on the 12th November.