THERE WAS double joy for English pool fans as both their sides won through to tomorrow’s semi-finals of the Dafabet World Cup of Pool with excellent wins in Bethnal Green. First the holders England A rolled over Romania who had done fantastically well to reach the last eight in their first World Cup. Then England B came from behind to put on a show as they took care of 2012 champions Finland.

England A can now look forward to facing Ko Pin Yi and Chang Yu Lung of Chinese Taipei while England B will face Naoyuki Oi and Toru Kuribayashi of Japan. Both matches take place on Sunday afternoon.

England A enjoyed a comfortable 9-3 win over the surprise package Romanian side who had exceeded all expectations in reaching he quarter-finals with wins against two-time champions China as well as Indonesia.

There was an air of inevitability about the proceedings though as England ran away with it after Romania got off to a solid start. Babken, who looked nervy in their second round match against Indonesia, rolled home a pressure table length 6 ball to set up the first rack and that became 2-0 as Ladanyi laid a perfect snooker from which Appleton scratched.

Following a dry break, England won their first rack after both sides had chances and they took the next to level before an extraordinary incident occurred when Ladanyi inadvertently left his short cue extension under to top rail and the 2 ball hit it to give ball in hand to England and they cashed in for 3-2.

The English won the next for 4-2 for their fourth in a row before the Romanians steadied a shaky ship for 4-3. However, Ladanyi scratched on the 1 ball when there was no need and Appleton and Boyes ran out to go 5-3 in the lead.

The Romanians gained ball in hand in the ninth when Appleton jacked up with the cue ball very close to the 1 ball and the cue followed through to foul. Ladanyi though missed the 2 ball which proved very expensive as England cleared for 6-3.

Another miss on the 2 ball, this time by Melkonyan, was another gift for the English as they went to 7-3 and then 8-3 shortly after. The Romanians resistance was spent as England A took the final rack for an easy 9-3 victory.

Appleton analysed the win; “For 2-0 down we didn’t really do a lot wrong but they looked solid at the start but yesterday they couldn’t really make a ball. Today is a different day so we couldn’t take them lightly but from 2-0 we played solidly and they made a big mistake at 2-2 when he left his extension on the table.

“That gave us a lot of breathing space and they didn’t really recover from that and they started to make mistakes. We broke pretty well. It seems the table is breaking better from the right side. At 2-0 down you are thinking it is going to be tricky so we are pleased to win 9-3.

“We were big favourites so that adds pressure and we are really in the tournament now. An all-England final is definitely possible now. On paper we have the tougher semi-final but that doesn’t mean anything. We would definitely like to play Mark and Daryl in the final.”

Boyes added, “When you get to the quarter-finals and it is a race to 9 you feel that you are in the mix. There was a lot of pressure on us tonight with a lot of people in pool saying we couldn’t lose but we had to go out there and do a job. Things went a little bit funny early on and they got a bit of confidence so we had to fight early on.”

There were more English celebrations as the B team of Daryl Peach and Mark Gray played an outstanding game to defeat Finland 9-4. Gray played about as good as he could and Peach was ample back up as they overturned a 3-1 deficit and then 4-3 to win six consecutive racks for the win.

Finland had won a lengthy opening rack with multiple safeties and they went 2-0 up with a 2/9 combination from Petri Makkonen. The burly Finn though, missed an easy 8 ball in the next as England won their first rack of the match.

No one was asserting themselves in the opening stages as the racks took time to play out, but with the score at 4-4, Peach and Gray broke and ran for the first time to take the lead and get the crowd going. Finland had suffered four dry breaks from four while England had enjoyed four successful breaks.

Peach and Gray then got on a roll as they played some excellent pool to get to 7-4 and when Mika Immonen missed a 2/8 combination, England B got to the hill at 8-4. Breaking for the match, Peach broke dry and left an open table for the Finland.

They both had visits before a thundering table length kick shot off the side rail and onto the 5 ball effectively ended Finnish hopes as England romped to victory.

Peach who partnered Gray in their only other appearance in the event in 2008 when they reached the final, said, ”If I could choose any partner in the pool world, Mark is the man I would be choosing. He is just a machine, he doesn’t miss balls. Any long pot, if I can’t get him close it doesn’t matter where I leave the cue ball. It means I am not under too much pressure to make the pots easy.

“We weren’t worried when they went ahead. We hadn’t done anything wrong. They broke dry and kept leaving us with nothing, which can happen. We took it on the chin, stuck with our game plan and it came good in the end.”

Gray added, “We get on pretty well off the table and appreciate each other’s ability. Daryl is a former World Champion and has loads of experience. I am still a bit raw maybe, even though I have been playing the game nine years now. I think that makes me feel at ease when I come to the table. He says I pot well but it takes two and his knowledge and his safety game is great. Last night I probably lead the team and tonight he was the main man. We trust one another.

“Japan is flamboyant, they are entertaining and they are also very good players; Naoyuki Oi has reached the semi-finals of the World Championship before and is well respected among the players, and Toru Kuribayashi is a good solid pro. I would say it is a 50-50 game, but the way we are playing and we seem to be getting better and better with every match, we think we can go all the way.”

​The following broadcasters are screening live coverage of the Dafabet World Cup of Pool:

thecueview would like to thank Luke Riches of Matchroom Sport for writing, and providing us with this article from the 26th September 2015. 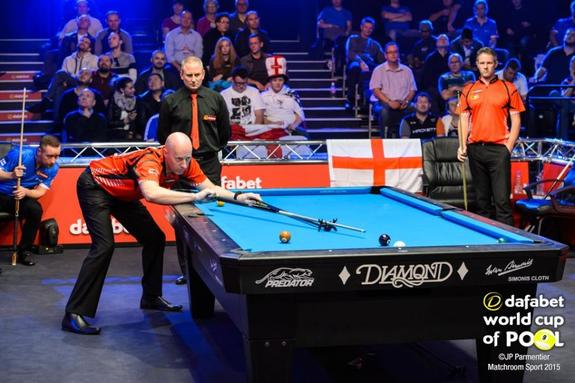