THE FINAL OF the 2015 Dafabet World Cup of Pool will be between fourth seeds Chinese Taipei and 15th seeds England B as they both enjoyed victories this afternoon in London.

First the Taiwanese team defeated a completely out-of-sorts England A to send the defending champions crashing out, and then England B dug deep to overcome Japan.

In the opening semi-final, Chinese Taipei made it through to the final of the 2015 Dafabet World Cup of Pool as they beat a very poor England A side that never really looked a threat to win. The Taiwanese pair of Ko Pin Yi and Chang Yu Lung became the first Taiwanese pairing to reach a World Cup of Pool final in the ten year history of the event while England’s dream of being the first team ever to defend the title evaporated in a haze of missed pots and poor positional play.

Both sides looked poor in the early stages and in the opener they both had shots on the 1 ball before Ko needed to jump out of a snooker but failed to connect. With ball in hand England opened their account. That soon became 2-0 before Boyes’s slow roll down table for a safe on the 1 ball, touched the 9 first and the Taiwanese made it 2-1.

Both teams made some bad errors in the next as they struggled to find their feet and a Boyes scratch into the middle pocket gave ball in hound to the Taiwanese and they dished up to level the match. There was more ball in hand action in the fifth game as Chang failed to hit the 1 ball and the English cleared for 3-2.

A dry break from Boyes though got the Taiwanese to the table and they took advantage to level but the English pair restored their lead in the next. The standard was slipping and when Appleton missed a pottable 8 ball, Chang jumped it in to set up the 9 for Ko. The Taiwanese then ran the next to take the lead for the first time as it moved to 5-4.

Appleton messed up a 5/7 combo and Chang deftly nudged it home and they cleared the table from there to increase their lead to 7-4. There was drama in the next as a shaky English pair contrived to miss the 9 ball but Ko’s bank left it perfectly placed for Appleton and he knocked it in for 5-7.

Willed on by the crowd, the English pair fought back to get within one of the Taiwanese but when Ko speared home the 9 to put his side on the hill, things looked ominous. A dry break in the next saw a glimmer of hope for the English but Appleton’s careless whack at the 1 ball saw it miss and Chinese Taipei ran out to reach the final.

Ko is now into his third major final of the season and can make history tonight for Taiwan, “We are so pleased to be the first Taiwanese team to make the final and hopefully we can go ahead and win the trophy. It was a tough match and neither team played well but we did enough to win.”

Boyes summed up the English performance, “We played terribly really. We had some chances and they had a bit of luck but you can’t really say that is what cost us because it was a bad performance.

“We had a chance against Chinese Taipei to reach the final but it didn’t go for us. It isn’t easy when you are struggling out there and little things don’t go your way. Obviously Darren isn’t happy with the way he has played but he has put in so many good performances over the years.”

The second semi-final was a real humdinger as England B overturned a three rack deficit to defeat Japan to set up the championship match v Chinese Taipei. Mark Gray and Daryl Peach had played in this event once before in 2008 and had also reached the final and the way they played in the decisive second half of the match augurs well for the final.

The Japanese pair had provided so much entertainment throughout the week but just came up short in the second half of the match as the English pair stepped up a gear. They had lead 5-2 and looked a strong favourite but the English pair knuckled down and stepped up to the plate when the situation seemed bleak.

They came back to reduce the deficit to 5-4 and then 6-5 before the English pair came with some great shots to win three in a row to reach the hill at 8-6. The Japanese weren’t done as they took to the table and get to within one but a great bank shot under pressure from Peach effectively ended the proceedings.

Commented Peach, “It was a battle from the off, we were both struggling a bit today. In the early racks there was a lot of safes so it is easy to get out of stroke but that is no excuse and some of the balls we missed, we shouldn’t be missing them and we need to cut that out for the final.

Gray said, “I have only ever played in this tournament once and that was with Daryl where we got to the final before losing to USA. It is amazing to have a seven-year gap in the tournament and come back with the same partner and we are back in the final.

“We have had a really tough draw and maybe sub-consciously we were favourites today and that would be the first match where we are favourites since the first round, so maybe that affected our performance a little bit. But there is no excuse for some of the balls we both missed today.”

Naoyuki Oi said, “We felt confident before the match and we started well but we had some dry breaks and we scratched and that let England back into it. They were under pressure because they are at home and they were 5-2 behind but they had strong hearts and played well to win the game. We have enjoyed playing the tournament and we hope to be able to go further next year.”

​The following broadcasters are screening live coverage of the Dafabet World Cup of Pool:

thecueview would like to thank Luke Riches of Matchroom Sport for writing, and providing us with this article from the 27th September 2015. 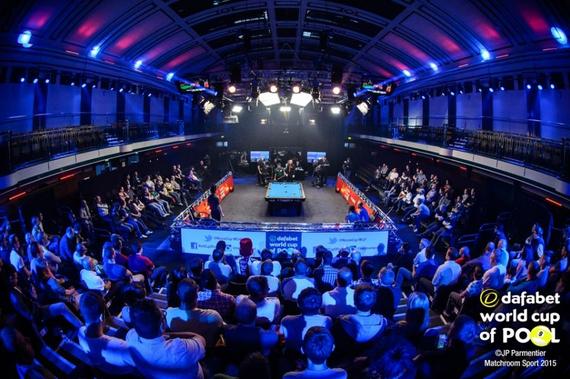