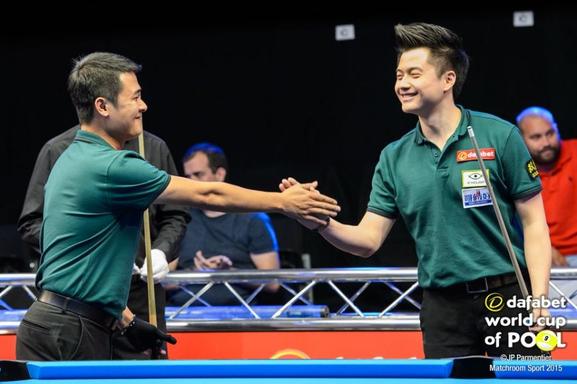 THERE WERE three more second round matches today at the Dafabet World Cup of Pool as minnows Romania continued their great run with a come-from-behind win over Indonesia. Austria and Chinese Taipei both had comfortable wins to set up a quarter-final clash on Saturday afternoon; Austria put paid to French hopes while Chinese Taipei scotched the chances of a decent-looking Polish side.

In the opening game Austria reached the quarter-finals for the second consecutive year as they comfortably defeated France 7-2. Mario He and Albin Ouschan looked an improvement on their first round match and will be a force to be reckoned with at the weekend.

The French duo of Stephan Ouschan and Alex Montpellier were a little off the pace but got the score to 2-2 after losing the first two racks. The matched turned quite quickly as Montpellier swerved out of a snooker, caught the 1 ball but scratched to leave Ouschan a 1/9 combination. They followed that with a golden break to go to swiftly move to 4-2.

The burly He seemed to have worked out the break as he crunched the pack open with some old-school power and a miss from Montpellier allowed them to increase the lead.
When Ouschan tied the French up in an inescapable snooker the writing was on the wall and the Austrians ran out 7-2 winners.

Commented Ouschan, “It was a very good performance, they struggled early in the match and we took our chances to take the lead. We don’t care who we play next because they are both tough teams.”

He said, “The break worked very well for us and that is almost everything when you can get a break to work for you at a tournament. At the World Cup of Pool it is straight knockout so the break needs to be good for you to progress.

“It is race to nine in the next round. We prefer to play the longer races because the luck you can have is limited. When it is longer races the better teams are more likely to come through.”

Giant-killers Romania continued their march to glory as they overcame the entertaining Indonesians in a thrilling second round match. Babken Melkonyan and Ioan Ladanyi looked nervous at times but they closed the match with some great shots under the pressure of the shot clock.

The Indonesians made the brighter start as they pulled away from 2-2 to take a 5-3 lead in the race to seven match. The big turning point came in the ninth rack when Muhammad Simanjuntak and Irsal Nasution colluded to foul without being aware of their actions.

With the Indonesians looking to push out, Nasution pointed with his cue to the exact spot on the rail where his partner wanted to push the white and he left it there when he played the shot.

That was a foul under the rules and with the resulting ball in hand the Romanians took the rack and then the next to level it. The Indonesians had chances but the match moved to a seemingly frantic pace as the 30 second shot clock came more into both teams games. In the end it was Romania who won through as they took four consecutive racks for victory.

The Romanians were delighted to get over the line and into the last eight at their first World Cup visit where they will face England A:

“I am very happy, of course, to go through to the quarter-finals – I am still shaking from the match,” said Babken.

“You could see that our game wasn’t so good. I wasn’t prepared well because I was very nervous. At 5-3 down I said to Ladanyi we just needed to win four racks and that is what happened. The foul there was important in giving us a chance at the table.

“Playing England will be very difficult, probably the most difficult match we could have had. They are the home team and have a good crowd behind them. We will need to work on our game before that match because they are a very good team.”

In the final match of the session Chinese Taipei put paid to Polish hopes as they ran away with it to win 7-3 and book a last eight match against Austria. With Ko Pin Yi firmly cemented as World No.1 and his partner Chang Yu Lung a shot-maker par excellence, it was always going to be a tough proposition for Poland (Mateusz Sniegocki and Wojciech Szewczyk) and so it proved.

The Taiwanese raced into a 4-0 lead as the Poles barely got to the table. That became 5-1 before the Poles rallied to win two racks and give themselves a chance but that was to be their last meaningful contribution to the match.

The following broadcasters are screening live coverage of the Dafabet World Cup of Pool:

thecueview would like to thank Luke Riches of Matchroom Sport for writing, and providing us with this article from the 25th September 2015.