TWO MORE seeded teams crashed out of the 2015 Dafabet World Cup of Pool as the penultimate session of round one matches continued at the York Hall. The #11 seeds Spain were well beaten by unfancied Czech Republic while the seventh seeded Greece were overturned by Singapore. The other match saw former champions Finland enjoy a tidy win over Belgium.

In a low quality match with plenty of errors, the Czech Republic had too much to the Spanish pair of the two Franciscos (Diaz-Pizarro & Sanchez Ruiz). In particular Sanchez Ruiz had a bit of a nightmare as he had a couple of glaring misses that helped the Czechs on their way.

Roman Hybler and Michal Gavenciak, who had reach the quarter-finals of the inaugural World Cup of Pool back in 2006, pulled away from 3-3 after being guilty of early errors themselves.

The turning point was the seventh rack as Gavenciak refused an open 6 ball in favour of laying a telling snooker. The Spanish failed to escape and with ball in hand the score became 4-3. From a powerful Gavenciak break in the eighth the Czechs ran out, and a 2/9 combo in the next made it 6-3. Spain could not recover as the Czechs booked a second round match against Qatar.

Commented Hybler, “We are really pleased to be into the second round. At the start of the match there was a lot of pressure for both teams and you could feel it. When we went 4-3 up I felt more confident and we made some good shots.

“We watched Qatar against USA last night. America was a favourite and they are out but the Qatari guys are very good. We will enjoy that match and hopefully go through to the quarter-final.”

Gavenciak added, “I wasn’t feeling my game at the start because I could feel the pressure but I relaxed as the game went on and now the first game has been won I know I will be more confident in the second match.

“The practice table doesn’t have the same pressure as the TV table and with the lighting it plays a little bit differently from the practice room.”

Finland, who has a very strong track record in the World Cup, was the better team as they disposed of Belgium to make the second round. The Finns have been champions, runners up and twice semi-finalist in the nine year history of the event and will be looking for a deep finish this year.

The same pair who won in 2012 – Mika Immonen and Petri Makkonen – look one of the more solid pairings in the event as they took their chances. The Belgian duo of Serge Das and Olivier Mortier had far too many errors to genuinely contend in the match as Finland ran out 7-4 winners.

“It’s great to be over the first hurdle because there have been some shocks in the first round and we avoided that and we are glad to be alive in the tournament,” said Immonen.

“Playing at York Hall is always very special. There is a great atmosphere here and it is a familiar venue. I was born in London so it is really special to play here.”

Makkonen, whose win at the German Open in the summer pushed him up to No.4 on the European rankings, said “We have confidence in both of our games and it is easy to play alongside Mika. We have to work on our breaks a bit more. The table is sliding so we have to adjust our shots but overall we played well today.”

In the final match another seeded pairing bit the dust as Greece got overturned by Singapore in a close and entertaining match. The star of the show was teenage sensation Aloysius Yapp of Singapore, who at 19 seems to have an old head on young shoulders.

With his partner, the more seasoned Chang Keng Kwang, played his part as they capitalised on some glaring Greek mistakes. Ekonomopoulus and Kazakis never looked entirely comfortable but at 5-5 the match was anyone’s but a failed attempt at a tricky combo on the 9 allowed the Singaporeans to take the rack and they ran out the last for the win.

Commented Yapp, “We played well and I am overwhelmed to beat Greece. They are a great team and Nikos has played in the Mosconi Cup, Kazakis went far in the World 9-ball last week. They are very good players so it is a great feeling for us to win.

“We are ready for Finland. We are playing very well and with this format, anyone can win.” 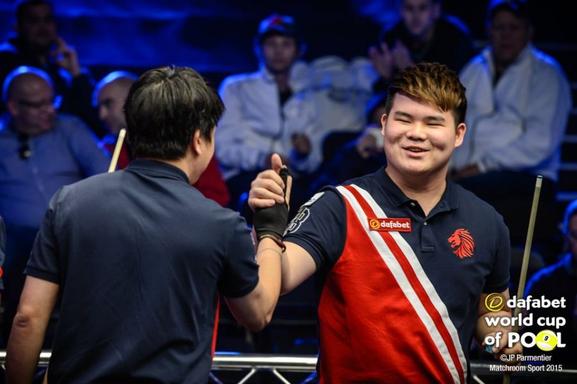