Niels Feijen continued his blistering form of the last two years with yet another victory on the lucrative EuroTour; this time at the Dynamic Billiard Austrian Open from Sankt Johann.

Current World 9 Ball Champion and rated number one on the European rankings, Feijen is no stranger to success at this particular venue having already won here in 2013.

There was a bumper field of 234 players for the fourth EuroTour meet of the year, partly due to added presence of youth and senior entrants who were already present for their respective European Championships.

The Dutchman wasted no time in getting stuck in though, making light work of qualifying for the last 32 knockouts. In the races to 9, Feijen took out Damian Adamus, Balazs Miko and Kent Karlsson with the combined loss of just 7 racks.

A stiffer test awaited Niels in the last 32, but he still managed a 9-7 win over fellow countryman Marc Bijsterbosch.

‘The Terminator’ then had to fend off in form pairing of Mario He (Austria) and Petri Makkonen (Finland); two players who have had various medal achievements over the 2015 ET series.

The competition got even tougher come the semi-finals, although the 9-2 score line for Feijen over the reigning European 9 Ball Champion Francisco Diaz-Pizarro (Spain) wouldn’t suggest so.

The final however would be a different task altogether, as young German prospect Joshua Filler was having the week of his short pool career.

The 17 year old had also come through undefeated, after winning four matches in the double elimination qualifiers. This included a somewhat groundbreaking 9-2 win over compatriot Oliver Ortmann; an opponent 31 years older.

The championship match was an entertaining and close affair.

With the youngster winning the lag at the start, Niels knew rack 16 would be his last break. Despite making balls off the break, he was forced to play a push out after being unable to attack the 2 ball.

A short tactical exchange followed which ended up in Feijen running the rack after being left a shot on the blue. Final score 9-7.

The champion took home 3500Euros prize money, and his second EuroTour trophy of the campaign after his Italian Open glory in February. It is his 9th EuroTour title overall, and strengthens his lead at the top of the rankings; he also looks a certainty for Team Europe Mosconi Cup selection at the end of the year.

​Written by Michael Day, published on the 11th August 2015 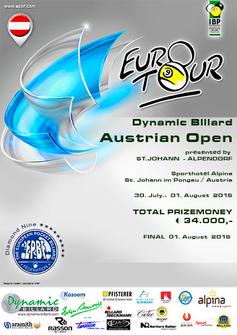