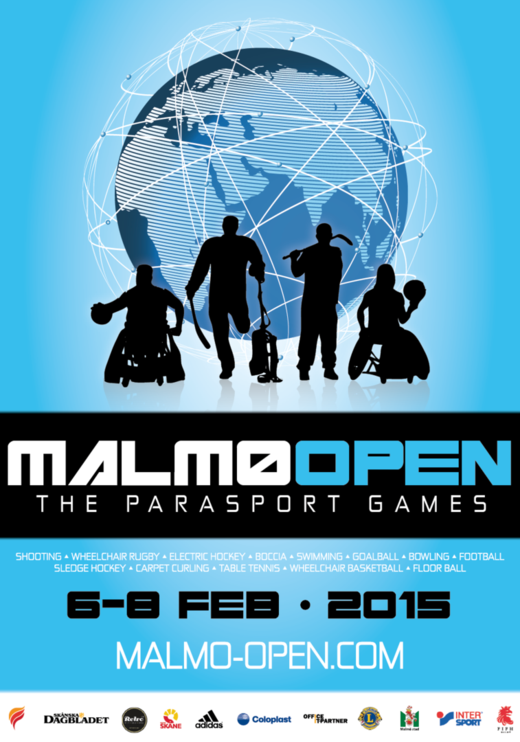 The inaugural European Wheelchair Pool Masters were a part of the 2015 Malmo Open ‘Parasport Games’ which saw over 2,000 disabled athletes compete in 22 different sports.

Sponsored by, and in conjunction with the Swedish Billiards Federation, the organiser of the event was competing home player, and, reigning World Wheelchair 9 Ball Champion Henrik Larsson.

To learn more about the Games as a whole, which has been an annual event since 1977, please visit www.malmo-open.com.

The tournament was an 8 man invitational, with players being selected from a ranking list of success in the European Wheelchair Championships’ 9 Ball discipline between 1999-2014. Should a selected player not be able to attend, the next placed person was asked.

The initial 9 Ball format was a double elimination qualifier up to a single knockout semi-finals stage.

Tahti and Dinsmore went through to the last 4 unbeaten, whilst Duffy and Nygard were eliminated.

Home hero Larsson beat Southern 7-2 to get a reprieve, as did the last surviving British player Kinberley, when he overcame Deklerck.

It meant the two most successful European Wheelchair Pool Players of modern times, Tahti and Larsson, would square off in a Scandinavian derby. However, it was the number 2 seed Larsson, who kept his hopes alive with a 9-6 scoreline. Meeting him in the final would be Kimberley, when he was victorious 9-5 against Dinsmore.

The final was set to be a tense affair, with not only the prestige of the title up for grabs, but also a 1,000Euros prize purse to the winner.

The culmination of a fantastic event would see Kimberley slightly upsetting the odds in a 9-6 win to become the very first European Wheelchair Pool Master.

For full results you can visit the billiardapps page here.

Written and published by Michael Day​