​A Treviso Open EuroTour title has put the finishing touches to a fantastic 2015 for Great Britain’s Mark Gray.

‘Granite’ has undoubtedly been one of European Pool’s top stars over the past 12 months, with success at home and abroad.

Locally he has won on the GB9 Tour, and internationally reached the final of the World Cup of Pool (alongside Daryl Peach for England B) and the semi-finals of the World Pool Masters. He also narrowly got edged out at the Last 32 stage of the World 9 Ball Championship in Qatar.

Victory in Italy at the weekend is his fifth career Euro Tour - more than any other Brit.

The 42 year old started his onslaught on the 180 player competition by coming through qualifying unbeaten. Wins over Nicolas Baumanns (Germany) 9-7, Jan Wolf (Germany) 9-7 and Tony Drago (Malta) 9-2 secured his passage to the straight knockout round of 32.

In the Last 4 he had to show his battling qualities to recover from 4-1 and 5-2 deficits in ousting Norwegian number one Mats Schjetne 9-8.

In the final he met the ever improving Alex Kazakis of Greece.

Kazakis had gone slightly the longer way after losing to Schjetne in the winners qualification round, but impressive scorelines over Tomasz Kaplan (Poland) 9-4 and Oliver Ortmann (Germany) 9-3 in the quarters and semis respectively, suggested a keenly fought championship clash.

However, a combination of mistakes from Kazakis, and supreme efficiency from Gray, saw the latter go home with the trophy in a comprehensive 9-3 win.

In the final end of season rankings, it means Gray ends up in third place, just behind Holland’s Nick van den Berg in second, due to having a slightly worse off minimum result.

Gray could count himself unlucky at not being picked as a Team Europe wildcard for the upcoming Mosconi Cup in Las Vegas at the start of December. He is a 2 in 2 winner of the MC (2008 & 2014), but the selection process was completed after the US Open - which he did not enter. Ironically, Karl Boyes (runner-up at the US Open) and van den Berg, received captain Marcus Chamat’s nod for the trip. Had this been a month earlier, it could well have been a different story.

The honour of being the top 2015 player goes to Niels Feijen (Holland). Wins in Italy and Austria during the campaign helped him reach and maintain the number 1 ranking.

​Results (from the Last 32 onwards) - losers each receive 500Euros

Written and published by Michael Day on the 1st December 2015 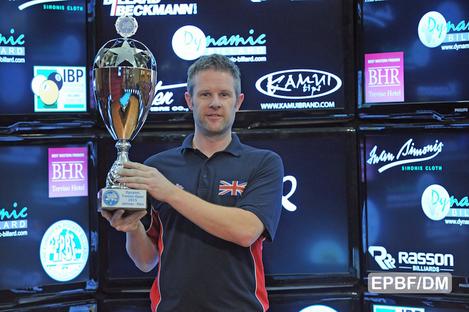 Picture is courtesy of the European Pocket Billiard Federation (EPBF)