Ouschan has had the most consistent and successful 18 months of his career; his victory at this year’s China Open even took him to the WPA World Number 1 spot for a short time. The triumph in Leende is his second ET title after also taking gold in the Bosnia & Herzegovina leg during 2012.

The Austrian star came through double elimination qualifying unscathed and then kept the majority of his knockout opposition at arms length. However, he did have to endure a hill-hill scare against England's recent World Cup of Pool finalist Mark Gray in the quarter-finals.

Home hero Niels Feijen’s run to the Last 16 not only keeps him top of the EPBF Euro-Tour Ranking List, but now also assures him of a place on Team Europe in December’s Mosconi Cup.

The last stop of this current EuroTour series will take place at the end of November with the Treviso Open in Italy.

​​Results from the Last 32 knockout stage - losers receive 500Euros each

Written and published by Michael Day on the 23rd october 2015 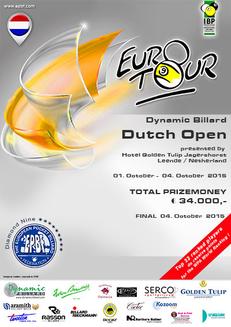 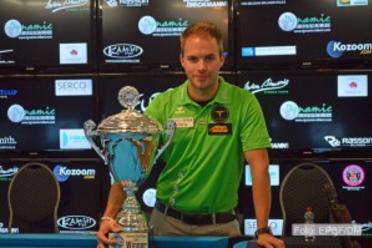 ​Photo courtesy of the EPBF