Reigning World 9 ball champion Niels Feijen of the Netherlands continued his brutal form with victory in the Dynamic Billiard Italian Open - the first stop on the 2015 EuroTour series.

Surprisingly it was the Dutchman’s first ET title since June 2013, but such is ‘The Terminators’ consistency that the 550 ranking points he gained here, puts him at the number 1 spot on the tours order of merit.

He also ran the gauntlet in Treviso unbeaten, after comfortably negotiating the double elimination qualifying process.

In the knockout round of 32 he whitewashed Rui Edgar Franco (Portugal) 9-0, and then ended the home hopes of Italian Bruno Muratore 9-5.

Pool legend Oliver Ortmann put up some resistance - but still ultimately lost 9-6 in the quarter finals, whilst Karl Boyes took Feijen closest in the last 4 by taking 7 frames.

In the final Niels would face a previous tour winner Nick Malai; yet another member of the impressive Greek contingent.

Malai’s route to the showpiece was far from easy.

After losing his opening match to last years WC9 runner-up Albin Ouschan, he had to win 5 matches on the losers side just to make the straight knockout stage.

But he did just that…..and then some!

He beat fellow countryman and Mosconi Cup star Nikos Ekonomopoulos in the last 16, and then former World Cup of Pool winner Petri Makkonen (Finalnd) in the Quarters.

The Greek then dispatched Austrian Mario He, to reach his second EuroTour final, having previously won the North Cyprus event in 2012.

He would be denied a double though, as the irresistible Feijen fashioned a 9-2 success to take the spoils and the 3500Euro prize. 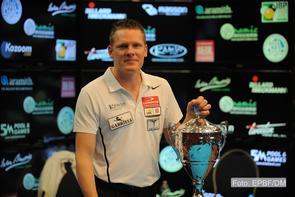