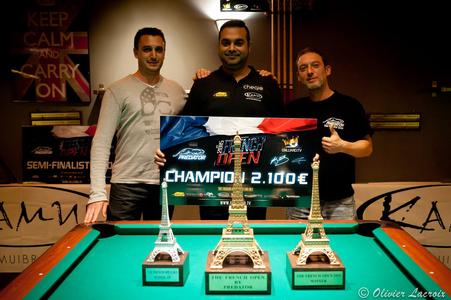 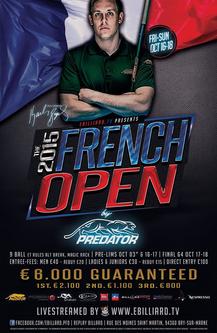 Representatives of European countries and beyond travelled to the suburbs of Paris for this hotly contested 9 Ball event - however, it would be another Englishman who took the spoils.

The long weekend began with more grouped qualifying (there had been a previous event for home entrants) as hopefuls attempted to join the seeded players and professionals in the main stage draw.

Despite spirited displays from a number of amateurs, the real big hitters would contest the latter stages, where Imran Majid outran the gauntlet to take the beautiful trophy and title.

In-form Majid, a finalist at the recent Dutch Open EuroTour, recovered from an early loss in the winners qualification round to beat classy opponents such as Vincent Facquet, Tony Drago and Marc Bijsterbosch for the glory.

He follows in the footsteps of Karl Boyes; the inaugural winner here in 2014.

thecueview would like to thank the 2015 French Open by Predator team for allowing us to use their photograph from the event.

There are a couple of Facebook pages about the tournamenthereandhere.

Written and published by Michael Day on the 25th October 2015