(ARTICLE WRITTEN BY MARTIN ROYCE OF THE GB9 TEAM)

The 2015 GB 9 Ball Tour Season has reach its conclusion with Craig Osborne, Mark Gray, Benji Buckley and Martyn Taylor taking the spoils at the final weekend of the year in Telford.

Osborne was eager to get off to a good start in this tournament, knowing that a good showing would go a long way to helping him secure the end of season #1 ranked status. Michael Beeston was the first to fall to Osborne’s sword, losing 9 racks to 4 and setting Osborne up to face Bob Harris in the next round. A 9-5 victory followed for Osborne as he made his way through to the winners qualifier round. Here he was to face the ever improving Mark Parker, but Parker’s best efforts didn’t quite cut it here. Osborne won through to the straight knockout last 16 with another 9-5 win. His opposition didn’t get any easier here, with Keighley’s Arfan Dad drawn to face him for a place in the quarters. Whilst the match went the distance, it was Osborne who was on the right end of the 9-8 scoreline and into the last 8 he went. Mark Gray, one of the tour’s most decorated players, was next to try and stop Osborne. He came agonisingly close but, once again, Osborne won a deciding rack thriller 9-8 to go through to the semi finals. Chris Cowie, returning to the tour after a long absence, was attempting to shock the field and snatch the British Grand Prix title as if from nowhere. Osborne had other ideas, however, and he stepped his game up a gear to win through to the final by 9 racks to 5.

Rhodes came flying out of the blocks in his opening match, hammering Gareth Pugh 9 racks to 1 before coming up against Terry Challenger in the next round. In a match that went the distance, Challenger pulled off one of the upsets of the season in defeating Rhodes by 9 racks to 8, sending Rhodes into the losers bracket and needing to pull off three consecutive victories to win his way into the last 16. Craig Seeney, Robin Cripps and Jon Davies all had shots to eliminate Rhodes from the competition, but consecutive 7-2 victories against all three players were enough to put Rhodes into the last 16. Here he was to face Stewart Colclough, another GB9 veteran capable of beating anyone on his day. Beating Rhodes wasn’t happening, however, and a 9-5 win saw Rhodes through to face Spain’s Juan Carlos Exposito. Exposito has become a consistent performer on tour since his joining, but the quest for a continental main event winner continues as Rhodes won through to the semi finals 9-2. Knowing that Osborne had also made it through to the semi finals, any mathematical hope of attaining the #1 ranked spot had gone. His battle against Alan Bell, therefore, was simply for a place in the British Grand Prix final – itself not a prize to be sniffed at of course. Whilst Bell had his best run in a tournament to date, it was to end at the hands of Rhodes – a 9-4 win put Rhodes into his second final of 2015.

Stoked from the knowledge that he was now the new British #1, Osborne was going to take some stopping in the final. Even a player of Rhodes’ quality was helpless in the final, with four break and runs helping Osborne to secure his second main event title of the season after May’s Paul Medati Trophy. Rhodes finishes the season safely as the British #2, a stat all the more impressive having only played four of the five events this season. It was fitting that the best two players in the 2015 season were the ones to contest the final major of the season, and GB9 extends its congratulations to both on an excellent season.

​​HALL CAN’T HALT GRAY IN PRO CUP
The final Pro Cup of 2015 was contested by Mark Gray and Chris Hall, with both players keen to take home their first piece of silverware of the season at the final opportunity.

Gray first came up against the returning Chris Cowie in the last 16. Gray wasted no time in going through to the winners qualifiying round with a swift 10-2 win. Little did he know he’d face him again in the final later, but Chris Hall was next in line to take on Gray. The relentless form from the opening round continued for Gray, and another 10-2 win saw him safely through to the last 8 where he was to face Ashik Nathwani. Whilst it has been a relatively successful season for Nathwani, it was to end here – a brave 10-6 defeat saw Gray win through to face the newly crowned British Grand Prix winner and British #1 Craig Osborne. Whilst Osborne wasn’t ready to go off and celebrate his new status just yet, Gray made sure he could – a well earned 10-8 win put Gray through to the final.

Hall opened his account with a very gritty victory over Cornishman Robin Cripps. A dogged effort from both saw the match go the distance, with Hall on the right end of the 10-9 scoreline. His next match was the 2-10 reverse against Gray, so a losers bracket qualifier match against Kettering’s Dave Evans was next up. Keen to get back on track, he wasted no time in dispatching of Evans 10-3 to put himself into the last 8. Kevin Uzzell was next up to face Hall, but again Hall’s solid form continued. A 10-4 win secured his place in the semis to face British Grand Prix finalist and defending Northern Masters champion Michael Rhodes. Rhodes wanted to take home a piece of silverware saying ‘winner’ rather than ‘finalist’, but Hall made sure he wasn’t going to. 10-8 was the result in favour of Hall, and the final awaited the Yorkshireman.

Both players were playing solid pool coming into the final, and the final was too close to call on paper. In reality, however, Gray found an extra gear to pull away. The result was 11-5 in his favour, and 2013’s British #1 ensured that he took home the final Pro Cup of 2015.

​​COTON BUCKLES AS BUCKLEY TAKES DOWN TIER I
For the first time since the opening weekend of the season, the entry levels determined that the Challenge division would split into two groups. In light of this, the Tier I final was contested between two very long standing players in GB9 ranks, Al Coton and Benji Buckley.

2013 UPC 9-Ball champion Buckley was in with a shout of finishing the season’s Challenge rankings in the #1 spot, and therefore wasted little time in his last 32 match with Adam Collins. Buckley won through to the last 16 with a 9-4 win, with Andy Worthington next in line to take him on. Worthington couldn’t consolidate on his solid season to date, and a match up with Arfan Dad. With Dave Nelson already out of the competition – Nelson being the only other player who could have pipped the pair of the to the #1 spot – Dad knew he was mathematically safe at the top of the standings. It was just as well, as Buckley duly defeated Dad 9-7 to continue his quest for Challenge Cup glory. His semi final opponent, Terry Challenger, was aiming to make his first ever GB9 final. The wait was to continue, however, as Buckley won through to the final 9 racks to 6.

Al Coton, a GB9 player from the very first season, was also looking at finishing the 2015 season on a high note. Mark Parker was first up to challenge Coton, but a 9-4 win saw Coton through to the last 16 to face another returning player in the form of Neil Margossian. With two highly respected players battling it out, it was hard to want a loser. Alas, there had to be one, and that loser was Margossian – Coton won a tight encounter 9-7 to go through to the quarter finals. Here he was to face Scottish hotshot Chris Fraser, another player safely in the top 10 of the Challenge rankings. Another tight battle followed, but again a 9-7 win saw Coton through to the semi finals to face anoher top 10 Challenge player in the form of Kev Simpson. Both were keen to make it to the final, but only Coton got the required victory. 9-5 was the scoreline, and Coton was the finalist.

Whilst only a small handful of ranking places separating the two going into the final, a close game was to be expected. Buckley, however, had other ideas. A dominant performance saw Buckley come out on top a 9-2 winner, taking home his second Challenge Cup title of the season.

​​TAYLOR SETS FIRE TO THE RAINE IN TIER II
Two of the newer names on the GB 9 Ball Tour – Martyn Taylor and Darren Raine – battled their way through to the Tier II final in the Challenge Cup, with both keen on ending the season with some silverware to their name.

Taylor began his quest for glory with a 9-5 victory over Welshman Terry Davies, a victory that took Taylor through to the last 16 to face Ben George. A close game followed but Taylor remained on the right end of the result. 9-7 was the score in favour of Taylor, and a quarter final match-up with Michael Beeston was to follow. Knowing he was two victories away from the final, Taylor stepped things up a gear. A crush 9-1 win saw Taylor into the semi finals, where tour veteran Mark Hughes was waiting to challenge taylor. A terrific and close game followed, with Taylor winding up on the right side of the hill in a 9-8 win.

Raine began his journey towards the final with a last 32 match against Steve Chick. A well earned 9-7 victory put Raine into the last 16 where he was due to face Andrew Carter. A more convincing performance from Raine saw him safely through to the quarter finals, a 9-3 win being more than enough to secure a spot in the last 8. His opponent there was Jack Triggs, and a tense affair then followed. Raine made it over the hill with a 9-8 win and set up a semi final with Kevin Taylor. It was a case of four different matches and four different margins of victory, with Raine defeating Taylor 9 racks to 5 to put him into the final against another Taylor.

Beating one Taylor was one thing for Raine, but beating a second was a step too far. Martyn Taylor finished the season with silverware in his hand, defeating Raine by 9 racks to 5 to end a successful debut season on GB9.

GB9 LOOKS FORWARD TO EXCITING 2016 SEASON
With memories of the last event of the 2015 season fresh in our minds there is no rest for the GB9 committee as we prepare to announce confirmed dates and details of our 2016 season.

If you are a member of the tour or a member of our extensive mailing list then check your inboxes in the next couple of days for everything you need to know.

We are taking entries now so don’t delay and get your application form in and pay your £75 deposit now to secure your spot on the ‘Toughest National Tour on the Planet’!!

​In 2015 GB9 was proudly sponsored by Rasson Billiards, Simonis Cloth, Aramith Billiard Balls and Carlson Rezidor Hotels making the perfect combination of the very best equipment in the most outstanding venues. 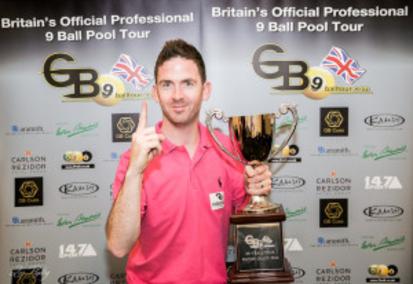