The 16 year olds both qualified top of their respective round robin groups with 100 percent records, each dropping only a frame in the process.

Come the quarter and semi finals it was a similar story, although Wongharuthai was made to work a bit harder in her last 4 clash with Bulgaria's Nikoleta Nikolova.

But it was Nuanthakhamjan who was the star of the show in the final with a relatively comfortable 5-2 win.

It is the second world title for the female from Chon Buri, after success at the 2014 IBSF Women's World 6 Red discipline in Egypt.

Wongharuthai made sensational headlines earlier in the event when she constructed a record breaking 124 break - the highest of the tournaments short history.

Results (from the Quarter-Final knockouts onwards) 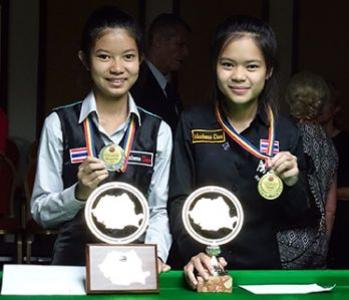 Picture is courtesy of the IBSF