Wendy Jans doesn’t look like relinquishing her dominant grip on the IBSF Women’s World Snooker Championship any time soon, as she took her fourth consecutive title in Hurghada, Egypt over the weekend.

With the standard of the female game on the increase; and now being played in more areas than ever before, Jans knew this year’s edition would be her most competitive and fearsome yet.

Jans qualified in second from Group A during the round robin stages. Her only defeat was to Amee Kamani (India) 3-0, who went through as top seed by virtue of not losing a single frame in her four matches.

Partly because of this loss, the Belgian was forced into playing a preliminary Last 24 tie against South African Joy Lyn Willenburg, although breaks of 53 and 47 helped her to a comfortable 4-1 win.

She would register a brace of half centuries in a 4-0 clean sweep of Diana Stateczny, before ending the number two seed Vidya Pillai’s hopes in the quarter-finals.

With the composition of the knockout draw, many thought her next tie would be a ‘World Champ v World Champ’ clash against On Yee. But Thailand’s Waratthanun Sukritthanes upset the formbook in a hard fought 4-3 success over the 25 year old in the Last 8.

Despite constructing a 47 to square it at 1-1, though, Sukritthanes would be on the receiving end of a 4-1 elimination, with Jans making a 94 in the fourth frame.

The top half of the draw was just as intriguing. 22 year old Russian Anastasia Nechaeva ran the gaunlet to deservedly book a repeat of the 2014 final in India.

She took out bright Australian hope Jessica Woods 4-2, Nuanthakhamjan 4-0, and Kamani 4-3 - after making a 50 in the decider, and coming back from being 3-1 behind. Nechaeva also strung together a 62 in the third in that game.

The final would be a relatively scrappy affair, but Jans was efficient at the crucial times. She went into an almost unassailable 4-0 lead, and although Nechaeva avoided the embarrassment of a whitewash, the job was complete in the sixth for a 5-1 victory.

For the 32 year old it would be the fifth time she lifted the trophy in total, and another double to go with her European Championship crown from earlier in the year. 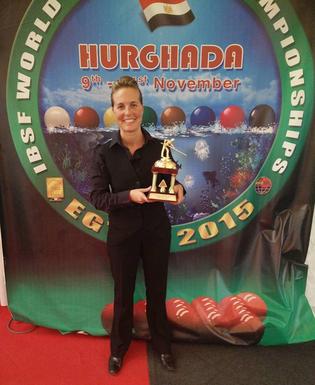