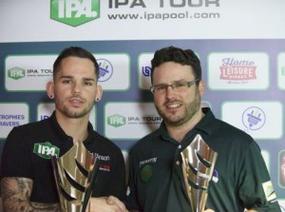 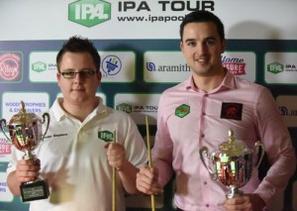 IPA STARS ON SHOW AT

As the dust finally settled after the 2015 World Championships, the IPA Pool Tour moved on to start the 2015 season in Llandrindod Wells in Powys, and with the cue sport history of the nation, we all knew a trip to Wales would be both exciting and informative.​

​Those who know their Welsh history will have heard of the Metropole Hotel, a landmark in the centre of Wales and a perfect choice to kick off the 2015 season, a hotbed of Welsh pool with plenty of local players happy to just mix with their heroes, and catch a few frames in the relaxed and informal atmosphere.

With well over a hundred and thirty players entered, and two rooms full of pool tables, it didn’t take long to get the action underway for three days of fun (always Friday to Sunday), and with new players on the tour, plus those signed up as professionals for the first time, there was a guarantee of high quality pool, surprises, and for me, a lot to try and learn as they make a pretty tricky game look so simple at their best.

As is always the case, every entrant gets plenty of pool (in my case, all the more frames to lose!), wit three competitions in total – the UK Open Championship for everyone who pays their entry fee, the UK Amateur Championship (self explanatory), and the UK Professional Championships, with a double elimination format for us mere mortals meaning we can lose and still get a second chance – all be it in the tougher half of the draw.

​As the three days flew by some quality action saw the field slowly but surely whittled down until on Saturday we got as far as the Open final where once again two from the Professional ranks rose to the challenge with Welsh player Andy MacDonald taking on young star Clint I’Anson in a match we eagerly awaited. Both had (obviously) played exceptionally well for the two days to get this far, and under the live stream lights and with both money and pride at stake (as well as ranking points) the pressure was on for both cue men, desperate to make their mark for the 2015 tour, though in the end, it Clint who emerged victorious by an 8-6 score line, after what many described as an absolute classic.

​After a very late finish we all got up relatively refreshed Sunday morning, fully aware we had plenty of games to go with both the Professional final and the Amateur final yet to come, so we settled down in our seats for an intriguing day, and as always, were not disappointed. While the Amateur semi finals continued, two Welsh lads lined up for the Professional Final as Simon Ward took on Jordan Shepherd in a real ding-dong battle. Sadly, the final score line fails to tell the whole story (so I will), with Simon racing in to a 4-0 lead which left it looking all over bar the shouting. Anyone who knows Jordan writes him off at their peril as he won the next frame only to fire up Simon who raced off to a 7-1 lead in the race to nine. Whether that scoreline relaxed Jordan or annoyed him only he knows, but suddenly he was strutting round the table at speed, clearing up pretty much whatever was left and within minutes, the score was 7-6 – some turnaround at this level. Sadly, the fairy-tale ending alluded him as the pendulum swung yet again and Simon took the last two frames to record a 9-6 success, but we were all glued to the match from start to finish, a brilliant advert for all that is good about Blackball pool and the IPA Tour.

Finally, as the weekend drew to a close, wee had the amateur final between Jack Whelan (yep, the 2015 World Champion) and new name Mike Leiper, who was very much on a learning curve, and had done brilliantly to get this far. One eight ball clearance gave Mike some limited satisfaction in a one sided 6-1 loss but he did have it all to do from the start so hats off to Jack for a clinical demolition to add the UK Amateur title to his previous accolades – not so much a player for the future but the player of the moment, and it will be interesting to see how he gets on over the rest of the season – next stop Bradford in May.

Sean Trivass would like to thank the IPA for all their help in producing this article.

You can view the full results from each competition via the IPA website link here.