The picturesque Erskine Bridge Hotel in Glasgow was the setting for the latest stop on the IPA 8 Ball Pool tour last weekend, and acknowledged by the players as perhaps the best yet.

Months of behind the scenes effort made sure all went smoothly, as players walked in to an Entrance Hall with state of the art screens displaying draws and live match scores from the streaming table and elsewhere.

Opening the doors to the main arena, a complete room of Supreme Pool Tables racked with Aramith Pro Cup Balls and Steve Grice Rack-Right triangles ensured the very best equipment awaited the combatants for the three main prizes (Scottish Open, Scottish Professional, and Scottish Amateur events), as over 140 players settled down to do battle in the double elimination format events from Friday afternoon through to completion on Sunday evening.

As always there is little point in trying to describe the matches on a frame by frame basis but suffice to say that making it to any of the finals required an almost unique combination of skill, consistency, focus, and a little bit of the run of the balls as in any cue sport, though there were no easy routes through with pretty much all the top 8 ball players in the World today in attendance and aiming for the prizes.​

​By Saturday evening we were down to the finalists as Prodigal son Marc Farnsworth, returning to the tour after a sabbatical, took on 2014 World Championship runner up Clint I’Anson in what looked likely to be a cracker, and so it proved. Having seen off Craig Marsh in the semis marc arrived in confident mood but then again so did Clint after a 7-6 victory over Luke Sanges, and although odds were available, I for one was unwilling to risk my cash regardless. Cutting a not so very long story short (they don’t mess about at this level and they finish five frames before I would finish the one) short, the pair traded blows like heavyweight boxers with neither really outshining or ever dominating the other, and is if scripted for the live stream audience, they took the best of thirteen final to a nail biting decider at 6-6 all to the delight of the crowd – though probably not the players. With less nerves than we expected to see, Clint fell over the line leaving poor Marc as the unlucky runner up but from a neutral’s viewpoint we got to witness an astonishing final that had just about everything going for it, though it was a genuine shame as always that there had to be a loser.

​​With a nights sleep to recover we all reconvened on Sunday morning knowing that we had not one but two finals to look forward to, headed in some eyes by the professional event between two popular Welsh players in Simon Ward and Kristian Phillips, who had seen off Gareth Hibbott and Clint I’Anson in the semis, so no easy path to the final for either player. The fact that they are good friends must have made the contest that little bit trickier for both players though Simon arrived in full on “destruction” mode and soon put the final to bed with a devastating performance that few if any could have lived with on the day. Clearance after spectacular clearance saw a one sided 9-1 scoreline though to be fair Kristian kept on battling with his limited opportunities and was sporting to the last, warmly congratulating his opponent when it was all over.

​​As for the amateurs, I really hate even using the word – there obviously is a gap in class between the pros and their nearest pursuers as witnessed in the Open which saw the professionals dominate but to watch, I defy you to tell the difference. Mark Boyle took on Scott Dunbar in an all Scottish final for the locals to enjoy, though this time big match experience may have given Mark the edge as he ran away the 6-2 winner to be crowned Scottish Amateur Champion 2015, much to his glaringly obvious delight!

All in all there was another positive response from the players about the only UK pool tour that welcomes players from any discipline or rule set regardless, and as we slowly move toward the next event in Warwick, and then on to the World Championships in Bradford in 2016 with entries already being taken for what seems sure to be the greatest pool tournament yet staged in the United Kingdom (full details at www.ipapool.com). Full results of the 2015 IPA Scottish Open Championships can also be found on that link. 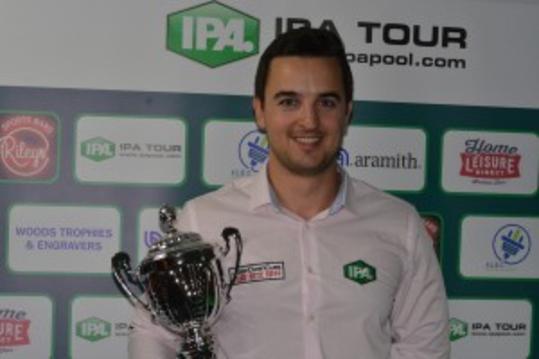