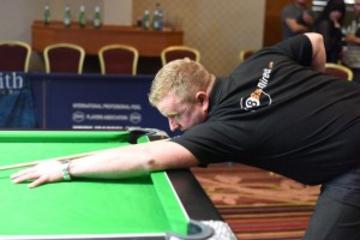 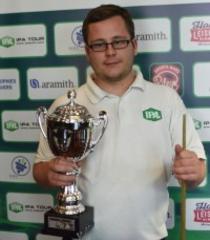 ​After a sensible summer break the big boys of pool returned to action at the Chesford Grange Hotel near Warwick for the European Open Amateur and Professional events, and as always, the best 8 ball players were in attendance with a sell out full house of 160 entries as the tour goes from strength to strength. Starting on the Friday afternoon, the popular double elimination format that gives everyone a chance (except me) took all twenty-two Supreme tables to slowly while away until Saturday night saw the first of the three finals. Despite theoretical chances for us all from the start (a bit like the lottery in my case – 14,000,000/1), the cream invariably rises to the top and the all professional Open semi final line up of Jordan Shepherd, Marc Farnsworth, Gareth Hibbott and Clint I’Anson sort of proves that point pretty emphatically. Late Saturday night the final four had given us a final of Gareth Hibbott v Marc Farnsworth, the ranking number one versus the prodigal son, last years all conquering hero against a man who had taken a year or so off, but returned to the tour refreshed and chomping at the bit for further success. Sunderland’s finest looked as if he was going to be on the wrong end of a pool lesson as he went 3-0 and 4-1 down in the race to seven as Gareth could do little wrong and took out clearance after clearance in front of a packed house and the livestream audience, and as a betting man it would have been heavily odds on for a Gareth win. One thing the top players do have that the likes of me clearly don’t is 100% focus on the job in hand added to supreme confidence in their own abilities and a comeback began that resulted in scorelines of 4-4, 5-4, and 5-5 effectively turning the final to a best of three for the prize money! With the momentum now in his favour and some rowdy support Marc  took out the last two pressurised frames to win 7-5 and cap a remarkable turn around in one of the best finals seen in some time which kept us all enthralled, with congratulations to the winner and commiserations to Gareth who also made it a match we will all remember for many a year.

​Those who can tell the difference between the top amateurs and some of the professionals  have better eyesight than me, and the quality of play and tactical knowhow exhibited by the likes of World Champion Jack Whelan and fellow amateur finalist Andy Blurton need to be witnessed to be believed. Swapping frames from the outset, some expected Andy to buckle under the pressure against the current World Champion in the best of eleven event that went all the way to the wire at 5-5 with the enthralled spectators as unsure of the likely victor as the players themselves. Despite all the pressure (can you imagine it at 5-5, making it a race to one to be crowned European Amateur Champion?), it was Andy Blurton who cleared up when needed and took the title though it really was one of those matches where no one deserved to lose. Our last final late in to Sunday evening was for the Professionals only, so the best was to be expected after semi finals that saw players of the calibre of Neil Raybone and Dan Davy fall at the last hurdle leaving Ronan McCarthy to face Jordan Shepherd in a battle of calm and studious versus attacking that seemed sure to enthral both the on site audience and the thousands watching on the free livestream. Sadly, the tight final we all expected failed to materialise with every possibility that earlier rounds had taken their toll on Ronan which when added to an on fire Jordan (who takes some stopping regardless in this sort of mood), meant a rather one sided affair that ended with a 9-2 win for the Welsh Wizard. His break never let him down throughout and he took out pretty much every clearance left in front of him – just what the spectators wanted to see, and a brilliant advert for all that is good in blackball pool!

For full results, there is a link to the IPA website here