Marc Farnsworth (left) took the Professional title, Craig Lakin (above) cleaned up in the Amateur. 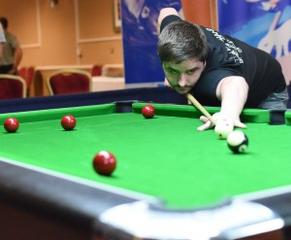 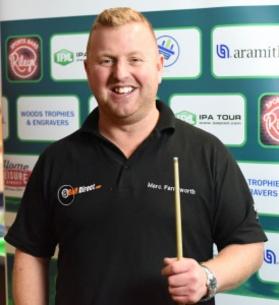 ​With a sob and a sniff the IPA Pool tour came to an exciting end last weekend down in Brighton at the Hilton Metropole with the Myracing.com sponsored British Open, Amateur and Professional events played to the more popular blackball rules that keep the game both fast and furious.

160 or so of the finest cueists in both the United Kingdom and abroad descended on the popular Sussex town looking for both prize money and recognition in the sport that they love, and make no mistake, these players just love their game and compete at e very opportunity they get. With twenty-two tables in the one room the noise of pool ball on pool ball can be a cacophony but it only makes for a superb atmosphere as some players (like me) dream of actually winning a frame), while others have far more realistic hopes of carrying away a trophy. Players from France Ireland Scotland Wales and Gibraltar all competed in the double elimination format, the most southern venue of the five IPA events but then again, with league after league switching across to blackball rules, there is a need to spread the tour geographically wider.

On to the pool now, and with the free HD livestreaming via the website (www.ipapool.com) available to anyone, pool players fans or interested parties got a great idea of what it is all about and hopefully got the bug for one of the few sports anyone can play (pop down your local pub, most will be the same table as we use, red and yellows, and the same set of rules), and that’s the why we like to think about pool – easy to play, but difficult to master, but as always, each event could only have the one winner.

The Open drew to its conclusion first with an all Welsh final of Simon Ward v Jordan Shepherd, two quality combatants who play to win, but invariably entertain the crowd at the same time. After racing in to a 2-0 lead Simon was soon pegged back as Jordan went on a run of classy finishes to build up at 5-2 lead after taking a handful of frames in a row to the delight of his raucous fans, though class is permanent and Simon fought back as you would expect to get to 5-4, before Jordan took the last two frames to rack up a 7-4 victory and add another trophy for his overloaded mantelpiece.

On Sunday we had not one but two finals as the Amateurs took centre stage, though the normally reliable Luke Sanges never got a look in against Craig Lakin who deservedly ran away with it 6-1, though we all know Luke will be back and is too good a player to let this affect him in the long term – just a combination of “not his day” and Craig in blistering form and in a hurry to get home!

The last final was, for many, the most important as the professionals lined up to battle to the finish, and Kristian Phillips versus Marc Farnsworth bin a race to nine. With no real benefit in offering up a frame by frame account, suffice to say that Marc walked away triumphant after a thrilling 9-6 victory that showcased everything that is good about 8 ball pool, thrilling the thousands tuned in on line who lived their every shot.

All that was left to do after handing out the prizes was to pack everything away ready for the World Championships in Bradford next February and then the 2016 tour – and accept all the plaudits for another brilliant event that proved to anyone in the sport that the IPA Tour is the business, and the only place for the top players to test their mettle.

Interested in pool? Registrations are being taken NOW for the 2016 season and the World Championships via www.ipapool.com, why not join in and give it a go, new players are always welcome?

thecueview would like to thank all the IPA team for their permission to use their articles and photographs provided.