​EUROPE TWO AWAY FROM ANOTHER VICTORY

Europe need just two more points to retain the PartyPoker Mosconi Cup as they once again won the session 3-2 to increase their lead to 9-6 with a potential six games to play on Thursday. The USA need to win five matches for victory but they will need to up their speed if they are to achieve that.

Taking place at the Tropicana in Las Vegas, the PartyPoker Mosconi Cup is the annual 9 ball shoot-out between two five-man teams representing Europe and the USA and is now in its 22nd year.

After another winning day, European captain Marcus Chamat said, “The guys played really well, the best they have played all week. The doubles matches were great for us. Corey got a little lucky against Nick but Nick battled great and unfortunately he didn’t win. We got some luck with Niels when he broke the 9 against Shane and in the last match Bergman played well.

“If everybody plays well it is very hard to beat our team. The USA have a really good team but when we play like we do then it is very hard for them to play us; like trying to play against Roger Federer when he was at his prime; if he plays good the other player will be second. We have this level of play and we can play even better and if we do it will be really hard for them, I don’t think they can play with us.

“We know as professional players that it is never over until it is over and anything can happen. I wanted to be on the hill tonight just so I could sleep well but 9-6 is good, it is a three-game cushion and it means a lot. We will have a team meeting tonight and try and relax and do the same thing we have been doing.

“At the moment it doesn’t matter if we play singles or doubles, the guys are geared up and playing well. Today the way they played, if they keep that up tomorrow it will be really hard for any team to come back.”

With their backs against the wall, the USA got off to a poor start when they really needed to hit their stride as Niels Feijen and Albin Ouschan enjoyed a comfortable win over Justin Bergman and Corey Deuel. 5-1 was the score and it increased the European lead to three.

Deuel, who had looked shaky in the opener, came straight back out to face Nick van den Berg and it was a match that neither player was at their best. There were plenty of safety exchanges as neither of them seemed to have the confidence to take the pocketing shots on. The match went to hill hill and both players made glaring errors trying to close it out, but it was van den Berg who made the final mistake to give Deuel the opportunity which he took.

Europe restored the three-point margin in the next match as Karl Boyes and Albin Ouschan looked composed as they took care of Skyler Woodward and a sub-par Mike Dechaine to make it 8-5 to Europe.

The momentum was really in Europe’s favour and the USA were on the wrong end of a real gutter in the next as Niels Feijen’s golden break in the deciding rack sealed another win for Europe. Shane Van Boening had fought hard to get the match back to level terms but could only watch as Feijen celebrated wildly.

Justin Bergman offered his country a glimmer of hope in the final match of the session as he put in a strong performance to defeat Darren Appleton and salvage something for the USA. It was the best display of the day from an American player and it gave them a fighting chance for the final day.

Commented American captain Mark Wilson, “Justin expressed, in the most non-egotistical way, how confident he was, he just quietly said to me, ‘I have got this Mark’.

“I was really proud of my team, they showed no quit in the face of a bit of adversity with Europe playing great again, but we didn’t come here expecting them to not play well and we knew we had to rise to the occasion.

“We had to win a day and tomorrow will have to be that day. The guys have their backs against the wall and know what it is all about. The mood in our camp is hungry and positive.”

​​thecueview would like to thank Luke Riches of Matchroom Sport for writing, and providing us with this article from the 10th December 2015. 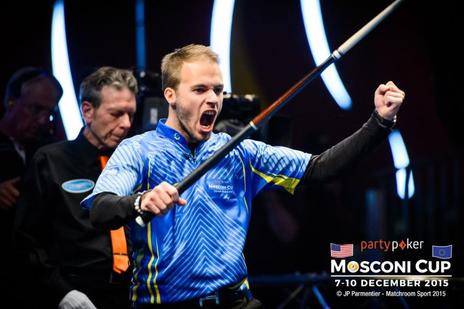