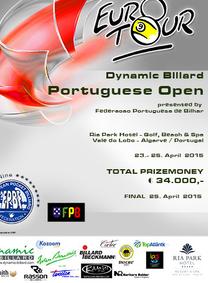 Mateusz Sniegocki of Poland is the 2015 Portugal Open EuroTour Champion.

The Pole, who is one of the more consistent players on the scene, shrugged off the whopping 217 player field which even boasted entries from as far as Singapore, Kuwait, Saudi Arabia and the UAE.

He defeated Spaniard Francisco Diaz-Pizarro 9-6 in the last 32, before having a tough test against fellow countryman Jakub Sawicki in the next round.

Ronnie Regli was another victim in the quarters, before sealing a final spot after another deciding rack victory playing Francisco Sanchez-Ruiz in the last 4.

Swedish veteran Marcus Chamat would await in the final, but Sniegocki started well taking a 5-1 lead, which he protected in coming out a comfortable 9-3 winner.