160 plus amateur players from across the globe made the trip to the Meadowside Leisure Centre in Burton, England, to compete in the World Snooker Q-School looking to fulfil their full time ambitions.

Professional tickets for the 2015/16 & 2016/17 seasons were up for grabs with two knockout format tournaments producing 4 qualifiers from each.

It was an interesting and varied field that would assemble, with a number of well known ex-pros such as Marcus Campbell and Andy Hicks, mixing it with confident and budding amateur youngsters.

However, the opening quartet of players to realise their dreams involved none of the above with Sydney Wilson, Daniel Wells, Eden Sharav and Rhys Clark all making the grade.

Out of the 4, only Wales’ Wells has experience within the sports highest tier, having 2 previous spells on the circuit accumulating to 5 years. A player a few years back who was awarded the inaugural Paul Hunter Scholarship, he was also within one match of playing at the Crucible in 2009.

Relegated at the end of the 2014 campaign, it will have been a relief to the Welshman to once again receive top status. In his last match at the school he beat Switzerland’s Alexander Ursenbacher 4-1, aided with a 120 break in the decisive frame.

Scottish pairing of Sharav and Clark underlined their undoubted potential; both names very familiar with the snooker fraternity having already played in a number of big events - and with some notable success.

20 year old Clark sealed his deal with a 4-1 victory over former English Amateur Champion and tour regular Leo Fernandez. The Stonehouse resident looks set to be a real contender in the ranks - earlier this season he defeated Kurt Maflin and home hero Pankaj Advani during the Indian Open.

Eden Sharav squeezed past Adam Duffy 4-3, rightfully gaining promotion after a number of consistent and impressive results over recent times. This year he also played in India; and qualified for a trip to China’s International Championship.

Sharav led after 4 frames with runs of 103 and 83, but was forced to a seventh frame which he won by 53 points.

Englishman Wilson recovered from losing the opener to Chen Zhe of China, by claiming the next four frames with a high break of 49. A fixture on many European Tour / PTC events over the last few years, Wilson told World Snooker -
“I was very nervous. I played solid and concentrated throughout the tournament. Mentally I’ve been strong. There is huge pressure here, the format is cut throat as your season is judged on 2 weeks. I feel as if I was meant to do it, and I’ve trusted myself that I would get there. My goal now will be to stay on the tour.”

Marcus Campbell, demoted from the tour last month after 24 consecutive seasons a professional, will have to sweat it out in the last chance saloon after being eliminated by Wilson second match in.

Former World, UK and Masters semi-finalist Hicks will also have another bite of the cherry, after he was whitewashed by Duffy in the last 16.

‘The Prince of Pool’ Duell narrowly lost 4-3 in his first game against Jamie Barrett.

First impressions on this years edition of Q-School and we see a real youthful group of talent coming through - the first four graduates are all under the age of 27.

Obviously Wells is the only one to have had pro stature before, but Clark, Sharav and Wilson have all been involved in World Snooker events, something which put them in good steed for going through.

They all have a sturdy platform to build on, and with a guaranteed 2 year protected card, they will hopefully play without too many inhibitions. 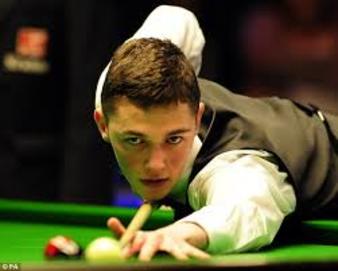