READING OFF THE RIGHT PAGE!

Welsh youngster Jackson Page is the new SWSA Under 18’s Kay Suzanne Memorial Trophy Champion after ousting Riley Parsons 3-2 in the final at the Gloucester venue.

The 14 year old only just qualified from Group B on frame difference ahead of Hamim Hussain and Aaron Cook, who all beat each other in the round robin stage.

Page would certainly make it count. He eliminated the previously undefeated duo of Hugo Tomas and Tyler Rees in the quarter and semi-finals respectively, before his championship victory over Parsons. He also made the tournament’s highest break with an effort of 90 in the opening frame of the final.

Harry Farrell went home with the consolation honour when he won 2-1 against Hussain in the Plate final.

The event was held in the honour of South West Snooker Acadmey owner Paul Mount’s sister, who passed away to breast cancer 13 years ago.


Written and published by Michael Day on the 11th November 2015 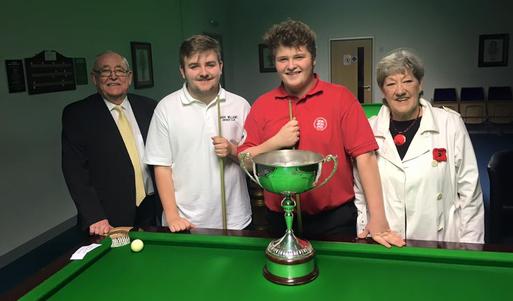 The finalists: Jackson Page (in white) and Riley Parsons (in red). Prizes were awarded by the parents of Kay Suzanne, who are also in the picture. Credit - South West Snooker Academy Facebook page.​