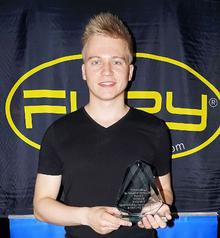 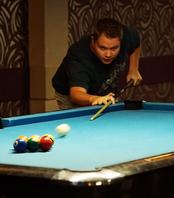 Total9Ball returned on Saturday 27th June for event 5 of their 8 event Amateur Series of 2015. Once again the event gained the maximum support of 32 players and what a line up it was. Players travelling from up and down the country to compete for the trophy, prize money and ranking points. As always there was the break-dish side event. The pot this week after sales reached a massive £900!!! Once again Total9Ball were extremely pleased to have new players at this event competing for the first time. A warm welcome to Gareth Pugh, GJ, Marlowe Malicdem and Roderick. We hope you enjoyed your first event. It’s always hard to assign a handicap for new players but now we have to results to go on we can make adjustments accordingly to make sure it's correct for next time.

The first seven matches kicked off just after 10.30am. All matches were played as a race to 7 racks using alternate breaks with the handicaps added on top (handicaps at this event ranged from +4 to -3). The very first match drawn was a cracker on paper and by result Brian Cassidy took on Tom Staveley in a fixture that could of just as easily been the Final rather than the first round. These two class players ranked 2nd and 4th respectively battled hard for the result but it was Cassidy who managed to win the all crucial hill-hill final rack. End result Brian Cassidy 7v6 Tom Staveley. Mark Williams results of late have been improving nicely along with his all round game, an impressive 7v1 victory against Rich Fulwell will do his confidence no harm either, T9B recently crowned Chris Seville as UK Champion (now off a -1 handicap) and he started this event well with a cool 7v2 victory over Wycombe based player Mark Newell. Graham Clegg won his first Total9ball match 7v5 against Ashik Nathwani, as a new player I’m sure Graham was very pleased with such a scalp. Friends collided as Alan Bell took on his travelling companion Bob Harris, Alan managed to get the better of Bob 7v5 on this occasion. We were pleased to have the support from the guys who organise the SMB events held monthly at Victoria Riley's. GJ’s event kicked off with an extremely tough challenge against Elliott Sanderson, GJ was defeated 7v2 but took it like a man and said ‘wow that was like playing Tony Drago on Speed’ not sure there was any need to throw your coffee over many players though GJ! haha!

​Marlowe Malicdem made a good start to his T9B debut event as he managed to get the better of Dan Lim 7v4 who is currently ranked number 14. Marlowe wasn’t the only SMB player to gain a victory in the first round as on the other side of the draw both GJ (7v4 Jamie Hobbs) and Roderick (Mark Williams 7v5) showed there class. Tom Staveley did manage to score a victory against Lionel Brown 7v3 in the right side of the draw to save his event from an early finish. Dan Lim appeared to be showing the form that he showed back at event 1 in the second half of the draw, an excellent 7v3 victory against Ashik Nathwani booked his place in round two.

It was Break-dish time!!! the pot of a brilliant £900 was divided up to £75 per ball with a £150 bonus for the ten ball clearance. First up... St Albans local talent Dan Lim. Dan smashed the balls apart with his usual casual style of play. A ball dropped in the middle bag and for a split second it looked like this would be a great opportunity for Dan to test himself against the pressure of the break-dish but it wasn't to be as the balls teamed up against him leaving him hooked on the next legal ball. Dan decided to collect the £75 not a bad prize for one shot. As Dan collected some cash we jumped straight to the last attempt as per the break-dish rules. So the final player who would make an attempt this time at a reduced pot of £5 per ball and a £50 bonus was Jamie Hobbs. Jamie nailed a near perfect 10ball break potting 3 balls. £15 was announced, Jamie decided to continue even though he was left with a difficult shoot. Jamie missed the following shot and therefore the pot of £825 rolls over to the T9B Weekender event now being held on Saturday 25th and Sunday 26th July at St Albans Hurricane Room.

In the second round we saw a lot of close matches played out in fact 9 of 16 matches played ended with 7v5 or 7v6 scorelines. Tom Staveley ended Dan Lim's event 7v5, Dan seemed disappointed after the match as he believed he had missed to many chances. Phil Wildman started his match well against Elliott Sanderson as he won the first 5 racks, Elliott fought back but it was in vein as Wildman advanced 7v4. Graham Clegg built a convincing lead against GJ on the front table at the Hurricane Room, GJ looked like he was up for 12 rounds though and began to fight his way back into the match Rocky Balboa style battling from 6v2 down to 6v5 but this match wasn't one Graham was going to let slip as he held his nerve to progress 7v5. Ryan O'Neill was continuing to put together a fantastic event of results, Ryan took out Phil Wildman in round one and followed this with an excellent 7v3 win over talented Elliott Sanderson. Wayne Rooke was involved in the nail bitter match of round two as he took advantage of a couple of uncharacteristic misses by Alan Bell and took the match 7v6. All players winning through this round would be seeded players for Event 6 held on Saturday 22nd August. Seeded players listed below:-

Left Side Right Side

So down to the last 16 as we can see from the list of seeds above Mikko Tuomi was the only player still in with a chance of winning the Jackpot at this event. Could he win another two matches in this round? He starting the round of 16 with an outstanding result as he ended Brian Cassidy's event 7v0! Unfortunately Mikko followed this result with a 5v7 defeat against a vastly improved Shakz Islam. Tom Staveley showed no signs of being the third minus handicap player to be eliminated by Bristol's Ryan O'Neill as he sent Ryan packing 7 racks to 3. Steve Chick showed great fighting qualities as he ended current rankings leader Phil Wildman's event 7v6, Phil lead 5v3 but Steve took the next 3 racks to lead 5v6 pouring the pressure on Wildman. Wayne Rooke continued his good string of results beating Chris Seville 7v5.

The Quarter Final Line up is below with results:-

Just four players remaining and the tournament was well on time for a 10.30pm finish. In the first Semi Final Lionel Brown took on Wayne Rooke. Both player are off the same handicap and therefore it was a straight race to 7 racks. Wayne controlled the match and looked to be playing some top 9ball pool. On the day Wayne had to much for Lionel and he booked a place in the Final 7v3. Tom Staveley began his match on -3 racks while Veslin Papradanov started on +3 racks. This was a potential banana skin match for Staveley after a long day and to be fair Veso was playing some excellent pool this being backed up by some brilliant results. It was a tight match but it went with the favourite as Tom reached yet another T9B Final 7v5.

The Final – Staveley vs Rooke – both players play at a nice tempo so this was sure to be a good watch. Tom began to eat away the handicap in the early stages of this match and Wayne seemed a bit on and off as we missed a few balls he wouldn't normally but would then break and run the next rack. Tom ended up the winning 7v4 and added another piece of beautiful T9B glass to his collection. Tom has been on top form recently and has now caught the handicappers eyes as he will see his minus 2 handicap change to minus 3 for future events. I'm sure Tom will see this a new challenge and will be happy that his game is clearly improving and he becoming more consistent and dominating tournaments.

The latest ranking are now available at www.total9ball.com – see how your getting on with just 3 events remaining, remember its still all up for grabs as only players best 6 out of 8 results will count towards the final ranking list. The top three players at the end of the season will be paid the following prize money 1st £250, 2nd £150 3rd £100. The top 16 players will also be seeded for the Grand Finals with the next 16 players who have attend three or more events competing the Grand Final line up. The Grand Final will also have over £500 in added prize money.

We would like to take this time to thanks our sponsors Dynamic Billard, Hurricane Room and Talisman for there ongoing support of T9B events. Thanks to Nicole Hansen for her work behind the tournament desk keeping everything ticking over, also to Mark Parker for taking some awesome action photos of the players and finally all the players who supported this event.