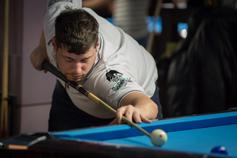 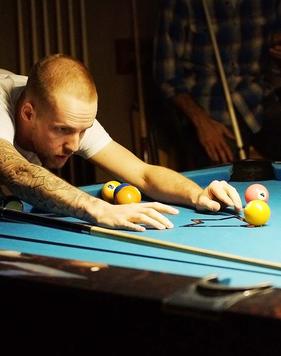 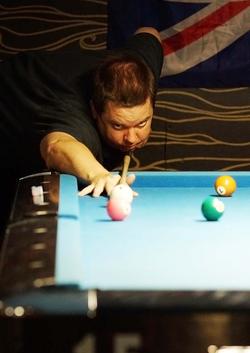 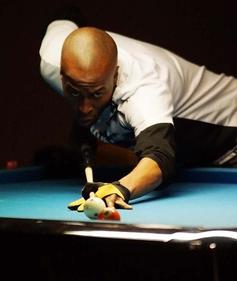 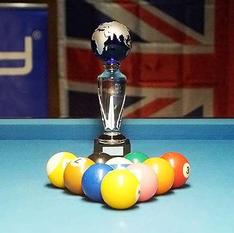 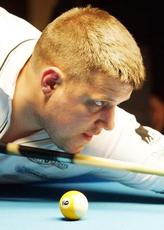 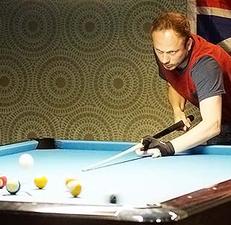 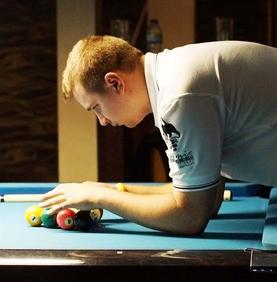 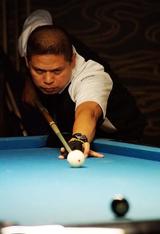 Matches kicked off at 10,15am The winner breaks format was used and each match was a race to seven racks plus or minus the handicaps. The winners of the opening 21 matches 1st round matches would automatically qualify for the Last 32 knockout stage. The 1st match losers would then competing against each other in a do or die match to fill the remaining spaces in the draw as non-seeded qualifiers. Chris Seville began the tournament well with a 7v4 victory over Jimmy Walsh, Tom Staveley made the most of a few missed 10balls by Rich Fulwell winning 7v3, experienced and former professional player Anthony Ginn impressed showing some form of old as he advanced past Ashik Nathwani 7v4, while Jonny Cooper appeared to have lost none of his ability at the table after a long absence from pool as he destroyed Dave Evans 7v1. The result of the opening round however was an impressive comeback from Jan Ibrahim as he beat Elliott Sanderson 7v6. All first round results can be found here - https://docs.google.com/spreadsheets/d/1g-cTELq98D3iuxnyvrWgaSSMvnp-0lShnkxZ57kpUdQ/edit?pli=1#gid=88783773

After the first round of matches were compete the T9B side events took centre stage. The one rack shoot-out was won by Del Sim and the runner up was Dave Evans. Sim collect £125 for winning 5 racks of pool and Evans collected £50 as runner up. Next up was the Break-dish, the pot grew once again through sales of raffle tickets and ended up at a cool £745, the prize was broken down to £60 per ball with a £125 bonus for the 10ball clearance. Unfortunately the three lucky players selected had no joy as Brian Cassidy, Jonny Cooper and Satyan Vadher all broke dry. The pot will next be available at T9B Dynamic Amateur Series Event 5 held at St Albans on Saturday 27th June.

It was now time for the players who lost out in the 1st round to compete against each other to try and earn their place in the last 32 draw. Ricky Collett was involved in a match that couldn’t have been any closer against Jaspal Bamotra, the match ended 7v6 to Collett. both players had chances in the deciding rack but it was Ricky who sunk the all-important 10ball, Andrew Carter looked to be striking the ball well as he got the better of Aslam Abubaker 7v2. Ashik Nathwani was drawn against Elliott Sanderson this meant we would lose one of the tournament favourites at the first hurdle. Nathwani (Leicester) played a good set of pool as he ended Sanderson's (Barnsley) event 7 racks to 4.

The last 32 draw was conducted by the players as they drew their own fate. The line-up was packed full of talent and players hoping to produce a performance strong enough to become UK Champion. In this round there were a few stand out results, Jamie Bryan and Steve Chick both registered excellent winning results, Bryan advanced 7v0 against Mark Hughes while Chick dropped just one rack against Bob Harris. At the other end of the scale there were a few 7v6 score lines Andrew Carter 7v6 Ken NG, Jermaine Pierre 7v6 Dale Cadet, Phil Wildman 7v6 Rodrigo Quarinte and Ricky Collett 7v6 Mark Parker. The shock result of the round came as pre-tournament favourite Tom Staveley’s tournament was ended by Ian Cherry 7v4 while Ant Ginn and Chris Seville both made sure they would be in the last 16 with wins over Jimmy Walsh 7v2 and Paul Taylor 7v5 respectively.

16 players remained and picking a winner was still near on impossible with so many quality players remaining in the event. Nick Hampton appeared to be advancing through the rounds with minimal trouble, in this round Dave Evans was on the receiving end of a 7v3 Hampton walloping, Phil Wildman produced the biggest win of the round as he took apart Matt Ford 7v1, Chris Seville setup a Quarter Final showdown with Wildman as he defeated Jermaine Pierre 7v5. Steve Chick looked beaten at 6v6 against Ricky Collett but Ricky made a mistake and left himself no shot on the final 10ball allowing Steve Chick a chance and that chance was taken. Brian Cassidy was the man responsible for ending Alan Bell’s decent run in this event 7v2, while Del Sim seemed to be taking all his chances against Andrew Carter, the match ended 7v4 in Sim's favour.

We now knew the shape of the Quarter Final line-up and if I wasn’t playing myself I would have quite happily watched all of these matches, results are below.

Just four players left and two excellent semi-final matches were contested. Nick Hampton booked his place in his first T9B event Final as he prevailed 7v3 against Del Sim. Next up was the match between Ant Ginn and Chris Seville, I only caught the conclusion of this high quality match. Seville lead 6v5, Ant Ginn was in and had a prime opportunity to take the match to hill-hill but a missed 10ball would cost Ginn the match. Speaking with Ant after the match he said ‘I felt good but had two ideas in my mind when shooting the 10ball hence the miss’.

Well what a Final we had in store, two players who are both at the very top of their game right now, Chris Seville has previously won a T9B event so perhaps that made him a slight favourite but it was Nick Hampton who raced into a commanding 4v1 lead, at this stage Chris Seville was left a chance and perhaps it was the turning point in a high class match, Seville cleared up to the 10ball but failed to find decent position on the all-important ball, he nominated a tricky bank to the left middle pocket, for me this was a must pot ball and to Seville’s delight it hit the centre of the pocket. Nick from here didn’t appear to do a lot wrong and before we knew it Chris Seville who had the lead 6v5. Nick had a glorious opportunity to take the match to a dramatic hill – hill final rack but as Hampton's confidence increased so did his speed of play and as he potted the 7ball he over ran the cue ball with left spin up towards the 8ball, unfortunately the white ball couldn’t have end in a worse place as it was locked in tight behind the 9ball meaning it was near impossible to legally hit the 8ball, the inevitable foul occurred leaving Seville a simple 3 ball run out to become UK Champion. Seville knew it was in the bag and sunk the remaining balls. It really was a brilliant final which swung one way and then back the other, both players gave it their all, did themselves proud and produced from a spectating point of view a great final to watch.

Well done Chris Seville, what a magnificent achievement to follow in the footsteps of previous winners Courtney Symons and Mark Gray and become 2015 T9B UK Champion. You are now a member of the elite club of UK Champions and the result was fully deserved. Chris Seville recently has been going from strength to strength and his game seems to improve with each event he plays. Unlucky Nick Hampton however you played a strong match in your first T9B Final and I’m sure an event win isn’t far away.

Well a dramatic finish to a good event and a new UK Champion Crowned. After results from this event all handicap changes are listed below
Bob Harris to -1, Chris Seville to-1, Mark Parker to -1, Richard Fulwell to +3, Veso Papradanov to +3*

Thanks goes to our event Sponsors Dynamic Billard, Hurricane Room and Talisman. Thanks also to everyone who has helped run and participated in this event.

Sat and Sun 11th and 12th July - T9B Weekender – (Max 48 players split into 3 tiers based on standard, loads of side games and fun. Enter asap as filling quickly) ​

THE PERFECT 10 FOR SEVILLE!

Sunday 14th June was the date selected for this year’s T9B UK Championships. This event has been run annually for the last three years and this year’s event was held at High Wycombe Hurricane Room. Previous winners of the T9B UK 10Ball Championships are Mark Gray 2013 and Courtney Symons 2014 but who would be victorious in this prestigious event this year?

Total9Ball received a total of 42 entries for this prestigious event, travelling from all over the country to compete. T9B were delighted to see so many players wanted the title of UK 10Ball Champion, therefore the format was changed to allow more than the usual 32 players to compete. T9B opted for a one round double elimination format followed by a last 32 knockout stage. This guaranteed all players would be involved in a minimum of two matches. This was the first time Total9Ball have tired this format with an increased field of players and as expected there were a few teething problems but T9B have learnt a lot from this event and we now feel we can make everything run a lot better next time around which is very exciting as it means we can accept more players to each event next season which will substantially improve the prize fund and the wow factor of winning an event.

T9B are not only gaining more and more regular players but also constantly gaining the support from new players. At this event we welcomed six new players - Dean Selvey, GJ Oyangoren, Jan Ibrahim, Jimmy Walsh, Satyan Vadher and Shady K Eddin. We thank you for your support, we also hope you enjoyed your first T9B experience and look forward to seeing you all again at future events.

Thanks to Dynamic Billard for sponsoring this event.