One of 9 balls most familiar and illustrious honours, was this year made even more prestigious with the proclamation from the World Pool Association that the event would carry World Ranking points for the top 32 finishers.

There was no difference in champion though, or to the strong entry list who were vying for a slice of the $40,000 plus prize money.

The two sided event was fierce, with Shaw defeating a pair of two time World 9 ball Champions in the shape of Germany’s Thorsten Hohmann and USA’s Johnny Archer on route.

The Scot was however pushed to the losers section after a narrow 9-8 loss to Canada’s John Morra. But Shaw negotiated three ‘B’ side rounds, including a 9-1 demolition of yet another former World Champion, Mika Immonen of Finland, to reach the Championship game.

There he faced a repeat against the unbeaten Morra, who had also crushed Immonen in the hot seat match by the same 9-1 fate.

The first 4 racks of the final were shared, but the European soon opened up a 5-2 advantage.

Morra stayed focussed though, and went on a 5 rack winning sequence to take a 7-5 lead going into the final stretch in the best of 25 clash.

However the reigning champion wasn’t going to be denied, taking 8 of the next 12 games to win 13-11 overall. 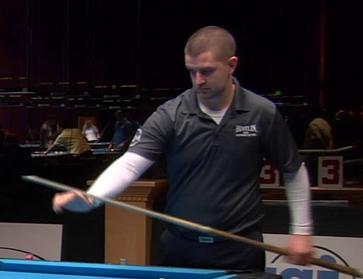