​Like all the top players, Canada’s John Morra just wanted to get out of the starting gates on Day 1 of the 2015 World 9-ball Championship with a win. A loss on the first day of  group play can be a total downer as you’re now suddenly faced with a pressure packed, do-or-die match in the double elimination format. If you don’t get your head in the game and your game in gear, you can quickly be headed for the exits in a New York second, you’re dreams of pool glory gone for another 12 months.

That’s the prospect the 26 year old from Toronto surely faced as he found himself down 6-1 and then 7-3 and playing miserably in his opening race to 9 match against Austria’s tough Mario He. Morra, however, has built up a steady stream of high finishes in the last 18 months and understood that winning in championship pool often requires patience, a positive attitude, and the ability to pounce when you’re opponent shows even the slightest bit of weakness.

And so when  the big Austrian made a few mistakes, and showed his disgust with himself, Morra took it as his cue that he had life remaining. Slowly Morra fought back, gained confidence, while He became more frustrated with the mounting mistakes. Tied at 8-8 Morra had the Austrian by the throat, played a  lockdown safety, and won the match 9-8.

“I was down 7-3, I just couldn’t find my stroke,” a clearly pumped Morra said after match. “I was getting some bad rolls and that’s expected when you’re not playing well. I just clawed my way back game by game. I was saying to myself ‘you’re going to get your opportunities so just stay calm.’   I started breaking well and I trusted my instincts under the pressure and just committed to each shot. Every little mistake he made gave me energy because he was getting upset with himself. I just fed off of that.”

Having turned near failure into opportunity and success, the talented Canadian suddenly feels the experience bodes well for his chances this year.

“I feel like I have a new life now. I was facing defeat and then maybe elimination if I lose my next one so that would’ve been a lot of pressure. But I managed to come back and win. So now I can just come out and play without pressure because I had my back against the ropes and I didn’t expect to win that one but I did.”

Morra’s gritty victory was easily the comeback of the day as the 2015 World 9-ball Championship got under way with 36 matches played out over four sessions at the sparkling Al Arabi Sports Club in Doha.  Fans used to stunning upsets in the early going in this event got nothing of the sort. What they did get was a quick reminder of the sheer amount of incredible talent from all corners of the globe and that over the next week, we are surely going to be treated to some of the highest level of pool ever seen.

Defending champion Niels Feijen found himself down 3-0 early to Qatar-based Filipino Francisco Felicilda, who has recently been playing some of the best pool in the Middle East. But the Dutchman stormed back and played brilliantly, routing the talented Pinoy 9 – 4. Only one player in history, Earl Strickland, has ever won back to back World 9-ball titles. Feijen’s opening salvo today showed he has every intention of trying to become the second player to accomplish the feat.

While Biado represents the best of the younger generation of great Pinoys, 45 year old Warren Kiamco is ably carrying the flag for the older generation of Filipino greats, especially with the absence of legends Efren Reyes and Francisco Bustamante.  As expected Kiamco easily beat Norway’s Vegar Kristiansen today.

Filipino fans looking for one of their own to go far can surely look to the low key Kiamco to deliver the goods this week. The 20 year veteran has been playing the best pool of his long career this year, as evidenced by his win at the Derby City 9-ball event back in January and quarter final finish at the World 10-ball in February. Kiamco, who spends nearly five months out of the year honing his game in the US, says his recent resurgence in pool is a result of a renewed commitment to the sport.

“I’m dedicated to this game,” Kiamco said. “I’m still practicing hard for the tournaments and also I’m quite disciplined and focused on my game. I need it. I have to make a living. This is the job that I know. I am also a member of the Philippine national team so I need to practice hard.

“In 2006 I stopped playing pool for a while but I got a new interest in pool. And now I practice all the time because I really want to do well. But in the World 9-ball you need to not just play good, you also need luck. If I can win this tournament that would really mean a lot to me. This is one of my dreams to be a world champion some day.  But it’s really tough. Too many good players, too many young players. And you have to be able to compete with all of them.”

One of those young players Kiamco could be referring to is the USA’s Mike Dechaine. Except for Shane Van Boening, top Americans have been scarce at the World 9-ball Championship for six years running, a sorry fact that nobody in pool wants to see continue. The 28 year old from the US state of Maine has been one of the USA’s best players for the last several years, and his recent string of near misses seems to indicate he is on to something big. This is the young American’s first ever time to play in the World 9-ball Championship. After defeating Chile’s Alejandro Carvajal today 9-4, Dechaine said he was thrilled with the experience and that it will be the first of many testing the waters overseas.

“I played Ok but not as good as I wanted to, probably 60 to 70 percent, but I’m just getting over my first World 9-ball Championship jitters,” Dechaine said. “I’m very pleased with the atmosphere, it’s incredible. You’ve got a big arena, every table is in perfect condition and they do it right here. The atmosphere is right. The jet leg is what hurts me but hopefully I’ll get past that and do well.

“I’m trying to expand my horizons. I want to start traveling a lot more overseas and getting more experience playing in different atmospheres and playing against different people who have different techniques. I think more of these trips are going to be in the future. I think I’m going to team up with Shane, maybe go to Moscow, go to Japan.

“I definitely think I can win this tournament. I play rotation pool with the best in the world. I think it comes down to the break. It’s very important that you get a shot after the break. That’s a little bit of luck. I just have to think positive and continue to make balls.”

The group stages continue on day 2 on Sunday at the Al Arabi Sports Club. Players in the remaining 4 groups will play their first round matches followed by losers bracket matches which will see two dozen players head for the exits.

thecueview would like to thank Ted Lerner and Richard Walker for supplying us with this article from Sunday 13th September 2015. 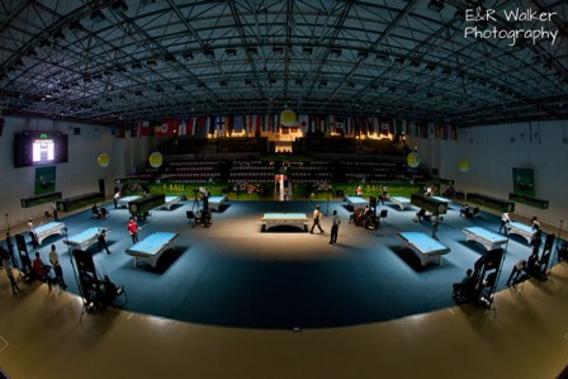 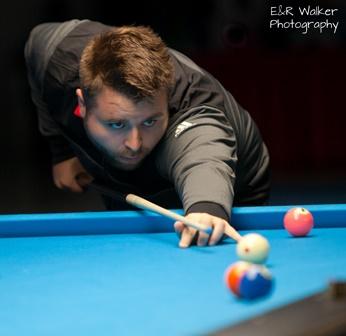 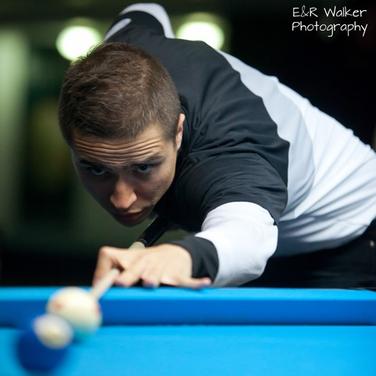