Indian green baize legend Pankaj Advani claimed the 5th edition ACBS Asian 6 Reds Snooker Championship on Sunday in Abu Dhabi. Even with the competitive nature of this shortened format of the sport, he went unbeaten throughout.

​Despite being just 30, Advani has 15 World Titles across various disciplines and formats to his name - he is the reigning IBSF Snooker (15 & 6 Reds) and Billiards (Timed) World Champion.

However, along with numerous national and international honours too, this is his first individual Asian snooker title. It also perhaps eases his semi-final defeat during the continent's traditional snooker championship in Qatar last month (he lost to eventual winner Kritsanut Lertsattayathorn of Thailand).

47 players representing 14 different countries started out in the Groups Stage which ran from Wednesday to Friday. To read an earlier article about this, please click here.

The weekend would be devoted to knockout action.

​After finishing top of Group B with 5 wins out of 5, Advani was spared a Last 24 match, and went straight into the Last 16. There he faced what would be his most sternest examination - a 5-4 victory over Hong Kong's Chau Hon Man. He made a 54 break in the decider.

In the Quarters he met Pakistan's Muhammad Asif, the 2012 IBSF World Champion, but triumphed 6-2 with runs of 42 and 40 in the process.

He had an even more comfortable time against fellow countryman and team mate, Aditya Mehta, in the semi-finals. Contributions of 48, 40 and 72 helped him into an almost unassailable 5-0 profit.

Mehta, who is currently of amateur status after temporarily resigning his professional tour card, dodged the dreaded whitewash with a 59 in the sixth, but another 40 from the eventual champ sealed it in the seventh for a 6-1 success.

Advani's opponent in the final would be Malaysia's Moh Keen Hoo. Amazingly, it would be a clash of the top two seeded qualifiers from the Groups Stage. The pair had both ended with 100% records from their Round Robin, and having dropped just five frames each. It was therefore somewhat fitting they should meet for the tournament's top honour!

In the KO's, the Malaysian eliminated Saeed Abooyesani (Iran) 5-3, Mohamed Shehab (UAE - the host nation's only qualifier from the Groups) 6-4 and Mohammad Rais Senzahi (Afghanistan) 6-3.

​The best of 13 final began close, with the opening four frames shared (Keen Hoo made a 51 in F2).

But Advani wrestled the advantage mid match, chalking up three of the next four to go 5-3 in front. He crafted a 45 in the eighth.

Keen Hoo kept on his rival's shadow by getting to within one on three separate occasions, but a 40 from Advani in Frame 12 confirmed a 7-5 overall victory.

Iran's Soheil Vahedi, the defending champion, bowed out in the Last 16 to Senzahi, who overcome a 4-2 deficit to win 5-4.

A trio of players made a 'maximum' 75 break - Advani, Asif and Habib Subah (Bahrain); all in the Groups.

Monday will see the start of the Asian Team Championship in the same venue. 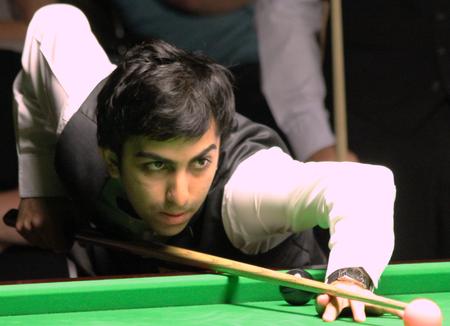