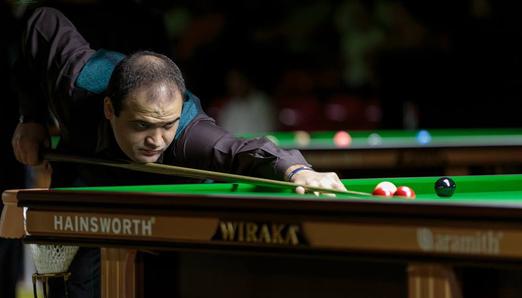 With the Groups Stage now concluded, we are into the straight Knockout portion of the Asian Confederation of Billiard Sports' (ACBS) 5th Asian 6 Reds Snooker Championship. Despite the competitive nature of the shortened format, the majority of the outright tournament favourites advanced.

Reigning champion, Iran's Soheil Vahedi (pictured above courtesy of BO Bader), progressed with minimal fuss after winning all five of his fixtures in Group C. As with the other seven groups, the table topper from each group automatically gets put into the Last 16. Those qualifying in either second or third place will have to play a Last 24 match to claim the right to meet them there.

Pankaj Advani (India), the talented multi-time World Champion across different disciplines, too made it through with a 100% record from Group B. The reigning IBSF world conqueror was also one of three people to compile a 'maximum' 75 break during this stage - Muhammad Asif (Pakistan) and Habib Subah (Bahrain) were the others.

Advani's fellow countryman and teammate, Aditya Mehta, was permitted to enter this amateur event due to temporarily resigning his World Snooker professional tour card. Mehta was untroubled as he qualified top of Group F with 5 out of 5 victories as well.

The host nation's hopes now squarely lie on Mohammed Shebab's shoulders - the current West Asian Snooker Champion emerged from Group E in first. He is the only remaining UAE cueist left in.

The competition will reach it climax on Sunday.