Dhruv Sitwala of India retained his title at the 15th edition of the Asian Billiards Championship.

Seven different countries from the continent were represented in this 'first to 100, best of' format.

​Sitwala coasted through his round robin group; achieving perfection. He won all four fixtures 4-0.

Elsewhere in this initial group phase, multi-time World Champion Pankaj Advani (India) repeated the feat, claiming all five of his matches 4-0 too (Advani was in a section of 6).

12 players made it through to the knockout stages. Another decorated master, Peter Gilchrist (Singapore), was forced to play in the preliminary round due to only qualifying in second from Group D. However, he made light work sweeping aside K.H. Sirisoma (Sri Lanka) 4-0 to advance.

In the Quarter-Finals, Sitwala kept his defence bid on course with a 5-2 success against Indonesia's Marlando Sihombing, and Gilchrist was once again untouched in dispatching Praput Chaithanasukan (Thailand) 5-0.

​The other Last 8 ties were all-Indian affairs.

​Siddharth Parikh beat Sourav Kothari 5-2; thus gaining some measure of revenge for his defeat to him in the national championship final a few weeks earlier.

But the big story in this round was the dimise of Advani, as B. Bhaskar ousted him 5-3; winning the eighth frame by technically just one point.

​Bhaskar followed this up with a 5-2 defeat of Gilchrist, whilst Sitwala beat Parikh 5-3 in the other semi-final.

Sitwala started the best of 11 final well and controlled the remainder of the match.

Bhaskar recovered to trail just 1-2 and 2-3, but the eventual winner would confirm his defence by chalking up the last three for a 6-2 win. 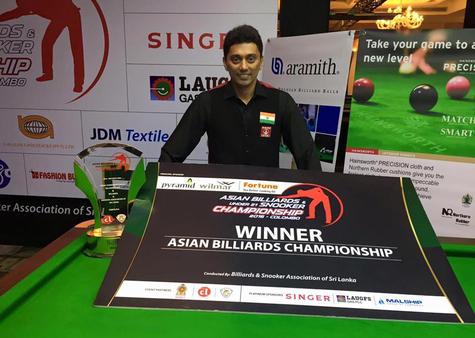