This amateur event is organised by the Asian Confederation of Billiards Sports (ACBS) and will feature representatives from 14 different countries. Unfortunately, however, there are no Chinese players taking part once again.

The reigning 6 Reds Champion is Iran's Soheil Vahedi, who won the title back in his homeland last year.

It is a keenly competitive field, with the entrants initially split into 6 Round Robin Groups of 6. The nature of this shortened format of snooker should also throw the draw slightly more open, with surprises more likely.

The event also features Aditya Mehta (India), a player who resigned his professional tour card last season and is currently of amateur status.

An additional bonus of this tournament is that the semi-finalists will all receive an invitation to the SangSom World 6 Reds (Professional) Championship later on in the year.

After the 5 days of 6 Reds, the action returns to the traditional 15 reds format for the Team Championship.

​Teams will consist of just two players across singles and doubles play. Once again, it starts off with groups qualification, then going into the knockouts.

Vahedi was also part of the Iran 'A' combination that beat their 'B' team in the final 12 months earlier. This ended the Indian dominance who took the opening two editions in 2013 and 2014.

But with a formidable looking partnership of Advani and Mehta, India look strong in their bid to reclaim the title. This duo narrowly missed out on the final of World Snooker's World Cup in China last year.

​Written and published by Michael Day on the 17th May 2016 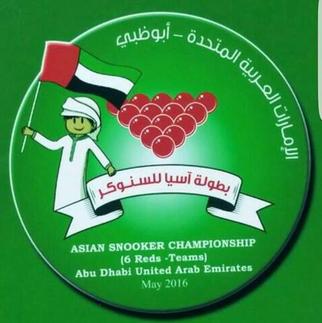