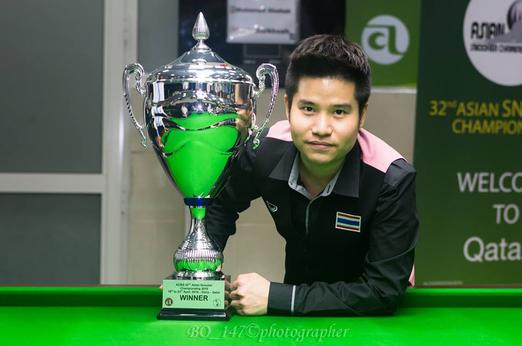 Kritsanut Lertsattayathorn beat Mohamed Shehab (United Arab Emirates) 6-2 in Saturday's final to become the 11th different Thai player to win the ACBS Asian Snooker Championship. It means of the 32 editions in the event's history, half have now been claimed by the country.

This was Kritsanut's first continental final, but he came to Qatar with real pedigree; only last year he reached the Quarter-Finals of the IBSF World Amateur Championship in Egypt.

Shehab, also the runner-up in this tournament back in 2006, took the opener with the aid of a 52 break.

​The eventual winner chalked up the next two, but last month's West Asian Snooker champion went level into the mid-session interval after depositing the fourth.

​On the resumption however, it was all Lertsattayathorn. He won four on the spin, finishing off his victory with a 53 in the last frame.

The 27 year old will now be offered a guaranteed two year professional tour card from World Snooker for his efforts, bolstering Thailand's already healthy contingent on the circuit.

Unlike his opponent today, Kritsanut has never previously played on the highest tier of the sport. He did however reach the Last 4 of the 2014 World Professional 6 Reds Championship in his homeland as a wildcard, eliminating Ryan Day, Mark Davis and John Higgins on the way.

Lertsattayathorn also made the highest break of the competition with the 142 he constructed during his semi-final success over pre-event favourite Pankaj Advani yesterday.

Written and published by Michael Day on the 23rd April 2016​