Snooker's biggest event breaks off on Saturday at the Crucible, but one of the sport's most prestigious amateur competitions also gets underway this weekend too; the 2016 Asian Snooker Championship.

Organised and overseen by the Asian Confederation of Billiard Sports (ACBS), the winner will also receive a guaranteed two year professional tour card for the World Snooker circuit as from 2016/17.

The 32nd edition will be held in Doha, Qatar where 59 players representing a very healthy 20 different nations will be taking part. Unfortunately, though, there will be no players from China making the trip (at this time I do not know the exact reason why).

India's Pankaj Advani will start as the favourite for one of the very few tournaments he has yet to add to his glittering Cuesports CV.

The reigning IBSF World Amateur Champion is a three-time runner-up, including last year to Akbar 7-6 in the final. The last time this championship was played here in 2012, Advani also lost to countryman Mehta at the last hurdle.

There will be plenty of stiff opposition standing in his way though, including recent former professionals Habib Subah (Bahrain) & Ahmed Saif (Qatar), and previous World Amateur winner Mohammad Asif (Pakistan).

I will try and keep you updated of its progress in due course!

Written and published by Michael Day on the 15th April 2016 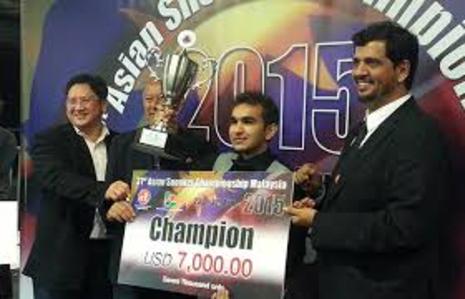