Wang Yuchen became the first Chinese winner of the Asian Under 21's Snooker Championship since 2011, after victory on Tuesday in Sri Lanka.

The 18 year old star has been a familiar figure on the world scene for a few years now, having been a regular wildcard for professional events in China. But with now winning the biggest title of his career to date, he can finally achieve his ambition of full time status on the highest tier of the sport.

Pretty much from start to finish, Wang was the best performing player. Only Thailand's Phuttakarn Kimsuk had a marginally better record from the round robin stage, although he was eliminated in the Last 16 by compatriot Pongsak Chongjairak 4-1.

32 players from 10 different countries started out in the 17th edition of this youth continental championship organised by the Asian Confederation of Billiard Sports (ACBS).

Divided into groups of either 5 or 6, the top quartet from each would qualify for the knockouts.

Wang won all four of his best of 7 fixtures; with the loss of just 4 frames.

As one of the top seeds, he avoided the preliminary round and moved straight into the Last 16. There he continued his dominance with victories over Abdul Raheem (Pakistan) 4-2, Haris Tahir (Pakistan) 5-0 and Ishpreet Chadha (India) 5-1 to secure a final berth.

Waiting for him in the championship decider would be former main tour professional Ratchayothin Yotharuck. The Thai, who was on the tour as recent as only last season, was trying to keep up his country's proud sequence of winners in this competition since 2013.

Yotharuck was impressive throughout too; finishing Group E with a 100% record, dropping just 5 frames (he was in a group of 6 though). He did however have to survive a deciding frame 5-4 finish with another Chinese prospect, Yuan Sijun, in the Quarter-Finals.

With the reputation and current form of both players, the intriguing best of 11 clash was predicted to go close.

The opening six frames were shared (breaks - WY 74 / RY 55, 64) before Wang forced a 5-3 advantage when chalking up the seventh and eighth.

Yotharuck would however take it all the way, convincingly claiming the next two including a 77 in the ninth.

With not just the championship, but also the guaranteed two year World Snooker tour card at stake, the pressure would have been immense. But it was Wang who ousted it 73-43 in the last, becoming the ACBS's nomination for the full time circuit in 2016/17 & 2017/18.

Chadha, who had beaten reigning IBSF World Under 18's champion Ka Wai Cheung (Hong Kong) 5-4 in the Last 8, made the highest break of the tournament with an effort of 130.

Written and published by Michael Day on the 8th March 2015 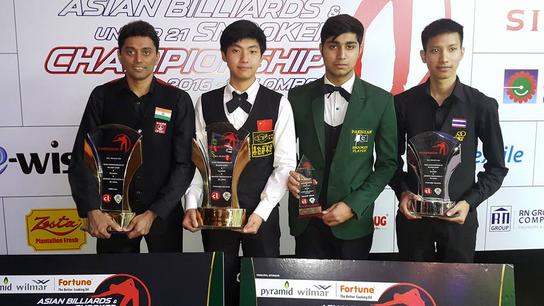