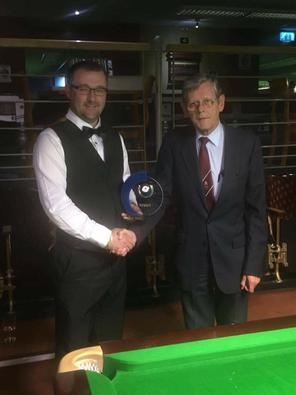 HALL AND ENGLAND CLEAN UP

Rob Hall enjoyed a fantastic long weekend's worth of action in Leeds as he captained the England A side that successfully defended their Home Internationals title, and then claimed another World Billiards Ranking event in the NSC Open afterwards.

​Hall, alongside teammates Darren Clark and Ryan Mears, saw off Republic of Ireland, England B, Wales, Scotland, Austria and Jersey to finish the HI's as champions after finishing the Round Robin on top with 6 out of 6 wins.

​Irish trio of Wayne Doyle, John Kehoe and Robert McCrum came second; their only defeat in the event being against the English 3-0 in a last session decider for the gold.

Out of the 18 individual fixtures played, England A lost just 2 of them. Hall and Mears ended top of the personal stats as the only two players in the tournament to go undefeated (6/6). On top of this, the captain also totted up the four highest breaks of this short format.

After the team tournament came the 2016 Northern Snooker Centre Open - a Level 2 World Ranking event carrying £1720 in Prize Money. Players not involved in the Home Internationals joined in to make a healthy field of 50 initially spread across 11 different groups.

​Hall continued to be untamed. He qualified from Group B with a 100% record and then eliminated Dave Sneddon (Scotland) 807-119 and Arthur Winn (England) 784-114 in the Last 16 and Quarter-Finals respectively.

Fellow countryman Robert Marshall would be his Final opponent; Marshall himself also went through the card clean.

But Hall, who earlier this season conquered the UK Open at the same venue, wasn't to be denied his double as he ran out a 531-257 victor.

For more information, and the full results, please visit the HIBSF and World Billiards websites.

Picture above is courtesy of Rob Hall's Facebook page.

Written and published by Michael Day on the 18th August 2016​​