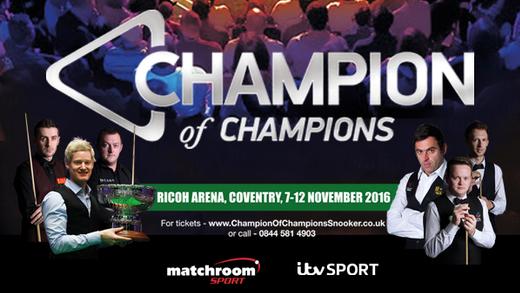 After a three week stint in China (if you include the mysterious Haining Open at the start of it), the professional snooker circuit returns to the UK. Off the back of this week's successful inaugural China Championship, we have another invitational event with the 4th Champion of Champions from the Ricoh Arena in Coventry.

As always, qualification is generally dependant on winning a competition over the previous 12 months. This time around, out of the 16 spots available, 14 are current champions. Marco Fu, the Gibraltar Open champion from December 2015, is the only withdrawal.

It means Stuart Bingham and Joe Perry are eligible as they top the one year ranking list and therefore take the two vacant spaces despite not currently possessing silverware.

I hope this fine event is not devalued in any way after the glitz and glamour of goings on earlier this week. The top prize in Guangzhou was £200,000 (the largest sum ever handed out in a non-UK tournament), where here the total is half of that. The First Round in Coventry is the best of 7, and the Semi-Finals the best of 11. In China, races were longer, although they were playing on two tables up to and including the Last 4.

ITV4 are once again covering the six days. There seems to be universal applause for the way they continue to showcase the sport. I understand Stephen Hendry is part of the commentary team once again, so that is a massive bonus.

To perhaps distinguish itself, the Champion of Champions basically completes a quarter of the draw each day. Two matches are played in the afternoon, and the winners return that evening to square off. The remaining player then advances to the Semi-Finals.

​Opening up proceedings on Monday afternoon is Ronnie O'Sullivan, who is undefeated in this event after winning the first edition in 2013, retaining it in 2014, but withdrawing from it in 2015. His campaign this season so far has been patchy to say the least, but being back on home soil in a one table set up from the start will suit him.

With no disrespect to his opponents, he is also in a favourable section of the draw. O'Sullivan meets Finland's Shootout champion Robin Hull, who is making his debut here. The winner will face either German Masters champion Martin Gould or World Seniors Champion Mark Davis; two players hardly in inspiring form over the last few months.

Tuesday's menu is very tasty! It features defending champion Neil Robertson, who hopes to halt a slight dip in form and results. I do remember the Australian coming into this competition last year with not much momentum before going on to win it. He then followed it up with victory at the UK Championship. He's more than capable of turning it around again. If he is, though, he will have to get past Bingham, and then either Ding Junhui or Ali Carter. Very tough to predict who will come through here.

The benchmark of snooker consistency, Selby will want to improve on his record here that has only seen him reach one semi-final in three. He will first have to dispatch English Open champion Liang Wenbo. He could then meet Mark Allen, last year's runner-up, the player who ended his winning streak a few days ago in China. That's only if Allen puts away Joe Perry.

Man of the moment John Higgins, fresh counting his pennies from his China Championship triumph on Saturday, will have a couple of days to recover when he gets his campaign underway on Thursday. Having not claimed a trophy since the 2015 International Championship, the Scot only secured his berth here this week. He will be looking to emulate (in some ways) Allen, who himself only made an appearance here last year by qualifying at the very last avenue.

However, he may not even start favourite against Shaun Murphy first up. Murphy, who is here courtesy of his World Grand Prix win in March, has been denied in deciding frame thrillers when deep in the last couple of competitions.

Surprisingly, both Higgins and Murphy have dreadful records here. Both have played in all three stagings so far, Higgins has just one match win to his name, whilst Murphy has gone out at the first hurdle each time.

Making up the draw are Judd Trump (qualified here via winning the Championship League, China Open and European Masters) and Indian Open champion Anthony McGill. Given McGill's pedigree of upsetting higher profile rivals at the Crucible, it is more than possible he can dismiss October's player of the month across a best of 7.

Written and published by Michael Day on the 6th November 2016​​​​