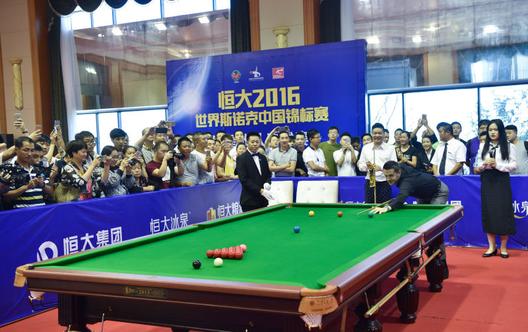 Staying in China, but moving far south to the city of Guangzhou, the professional snooker roadshow gets ready for the inaugural China Championship which runs from Tuesday to Saturday this week.

Unlike any other 'overseas' event currently on the calendar, this is an invitational competition featuring 16 players comprising of the top 10 in the World, 4 (not already qualified) from a season long list, and two wildcards.

The entries were confirmed a few weeks ago, so differ to the current rankings after last week's International Championship from Daqing. For instance, this was before Liang Wenbo's victory at the English Open a fortnight ago, therefore he is here courtesy as one of the two CBSA (Chinese Billiards and Snooker Association) nominations. For the record, the other wildcard is fellow Asian Marco Fu.

Likened to a 'Chinese version of the Masters', it boasts a whopping £200,000 winners kitty - easily smashing the previous highest payout for a non-UK tournament. We know how willing China is to holding the World Championship sometime in the distant future; the record prize fund here and even by the title 'China Championship' suggests how serious they are about creating a major tournament brand in their country. Even the first round losers collect £15,000. Not bad work if you can get it!

There are many comparisons and parallels to this and The Masters, although the qualification criteria, set up and format is slightly different. Crammed into just five days, up to and including the Semi-Finals will be played on two tables. The Last 4 will also be the best of 17, unlike at the Ally Pally.

Heading up the top section is World Champion and World Number 1 Mark Selby, fresh from his swashbuckling weekend performance in winning the International Championship.

Selby was at his best in destroying Stuart Bingham 9-3 and then home favourite Ding Junhui 10-1 across consecutive days. Even if he were to never win another trophy again, he would go down as one of the sport's greats with the titles he has already amassed.

​In facing Indian Open champion McGill, he plays the person who unleashed the 'Crucible Curse' on him during his first reign as World Champ in 2015. Since that defeat, Selby has got the better of him twice, but now a major winner, the Scot definitely has the game to at least scare him again.

Allen v Walden is a repeat of March's Players Championship Final where Allen won 10-6. Overall though, in career head to heads, they're locked at 8 wins each.

Northern Ireland's Allen didn't feature in Daqing last week having been upset in qualifying a few weeks earlier. 2014 International Championship winner Walden bowed out in the Last 16 to Ding, a result that sees him slip out of the World's Top 16 for the first time in four years.

​Williams was the beneficiary of Ronnie O'Sullivan's withdrawal and will clash with familiar rival and fellow multi-time World Champion, John Higgins.

Both from the class of 1992 (when the professional era was open), the successful quadragenarians have predictably met on a number of occasions, although only a handful of times in majors during this decade. Of those 'major' clashes, Higgins has won the last four, including a Last 16 tie at July's World Open, a semi-final at the 2011 World Championship, and the 2010 UK Championship Final. Williams last won under these conditions at the 2010 China Open.

​Judd Trump enjoyed one of the most consistent spells of his career to date during October after winning the European Masters in Bucharest, being runner-up at the subsequent English Open in Manchester, and then reaching the semis in China last week.

Carter too has had a pleasing season. He qualified for this event by virtue of claiming the World Open; his first major ranking trophy since coming back from cancer.

The bottom half of the draw also contains a trio of World Champions.

Murphy and Perry have had an indifferent few months, but would have been buoyed by Quarter-Final finishes at the IC last week.

Since dropping outside of the World's Top 16 in April of this year, Ding has responded emphatically. Runners-Up spots at the World and International Championship, he has taken trophyware at the Shanghai Masters and World 6 Reds. Now firmly back in the elite, he is one of the hot favourites here.

This all Asian meeting with Fu was the line-up at the 2011 Masters Final, which Ding won 10-4. It is a running theme throughout their matches, with the Chinaman enjoying a dominant record over Hong Kong's Number 1.

It will be interesting to see how much his thumping by Selby on Sunday will have affected Ding, although I suspect the maturity he has gained will put him in the right frame of mind.

At Number 26 in the World, Michael Holt is the lowest ranked player to be present. However, he has been one of the most consistent players on the circuit this campaign with a string of wins which sees him as one of the four qualifiers from the season long list. He highlighted a Last 8 run in Daqing with yet another defeat of Ronnie O'Sullivan - his third victory over him in as many appearances within the last eight months.

Neil Robertson is another big name player he has upset recently; eliminating the Australian from the World Championship at the first hurdle in April. Robertson did however gain revenge by denying Holt his first major trophy during the final of the Riga Masters in June.

Since that success in Latvia, Neil has followed it up with Last 4 offerings at the World Open and Euro Masters, although he was frustrated losing to friend Perry in the Last 16 last week.

Speaking of consistency, Stuart Bingham made yet another Semi-Final in Daqing; already his fourth of the season. He seems to be playing so much freer compared to this time last year when he may have been struggling with his new found World Champion status.

One of his Last 4 defeats was to Liang at the English Open. 'The Crazy Frog', as some people have affectionately called him, went on to scoop that trophy; his first career major.

​​​​Picture above is courtesy of the WPBSA

Written and published by Michael Day on the 31st October 2016