Judd Trump chalked up nine of the last ten frames to comfortably defeat Ricky Walden 10-4 and become the 2016 China Open champion; his first ranking title of any description this season.

Lifting the trophy Sunday evening in Beijing was a repeat of his maiden success here in 2011, this is also the first major championship he has now won more than once. It is his fifth major ranking title in all, four of those have been overseas; three in China.

Trump had rarely been troubled in this event; dominant pretty much throughout.

Back in February at Barnsley qualifying he brushed aside Joel Walker 5-0 to make sure of a berth at the venue stages. In the Last 64 he was given a walkover after Stuart Carrington withdrew ill, but he then dispatched Jimmy Robertson 5-1 on his first outing before another 5-1 thumping of fellow top 16 star Marco Fu.

During the quarter-finals, Mark King would provide his stiffest task to date, although the 26 year old managed to claim the last trio of frames in a 5-3 victory.

Adding all this with a comprehensive 6-0 elimination of Stephen Maguire in yesterday's Last 4, Trump dropped just a total of 9 frames in the entire event.

Walden's path to the final was completely opposite to Trump's. Despite also receiving a w/o due to Round 2 rival Robin Hull's chicken pox, three of his six wins during the competition went to a decider; and another was 5-3.

The pattern of the match started very similarly to Walden's Players Championship final defeat exactly a week earlier in Manchester - Ricky was featuring in back to back major finals for the first time in his career.

Just like at Event City, 'The Walnut' took a 3-1 mid-session advantage, helped with runs of 71 and 108, before losing the remaining frames of the afternoon. JT registering a brace of half-centuries in that process.

Trump resumed that evening with a 5-3 lead and further extended his winning streak with the opening four frames to move one away at 9-3; aided with a 69 in the twelfth.

After the last interval of the final, Walden returned to stop the eight frame rot when constructing a 64, but it was merely a stay of execution, as it was soon over in the next after a 55 from the winner.

Although collecting another Championship League crown and being very consistent during this 2015/16 campaign, 'The Juddernaught' will be relieved to have put a ranking title on the shelf before his Crucible onslaught. He will be hoping for a repeat of what happened in 2011, where he went on to reach the World Championship final (however, he did lose to John Higgins there after being in front).

The £85,000 he banks is his weightiest since his 2015 World Grand Prix success and sees him move up to 5th in the World Rankings (now opposite to Ronnie O'Sullivan in the WC draw...significant?)

​​Walden will be frustrated at losing consecutive finals, but is safe in the knowledge that he is in his best form of the season and now has a couple of free weeks to prepare for the biggest tournament in the world.

With the conclusion of this tournament, all the positions are now set for tomorrow's World Championship qualifying draw.

Written and published by Michael Day on the 3rd April 2016 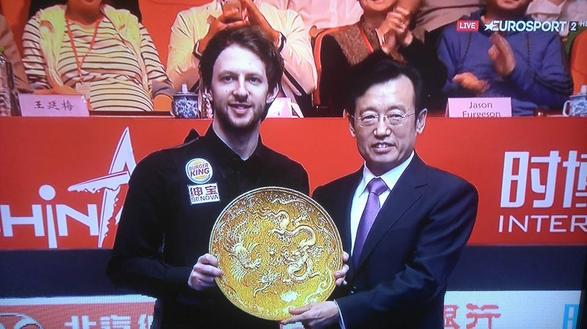