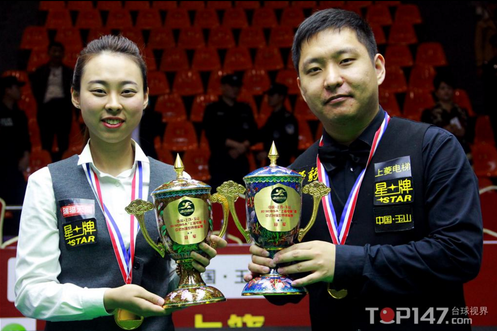 The Chinese fans were left happy after home heroes Shi Hanqing and Chen Siming took the Men's and Women's titles respectively at the 2nd Chinese 8 Ball World Championships this past weekend.

Click here to read how all the finalists got to this stage in my previous report.

Shi came out on the right side of a dramatic climax in his final clash with England's Mick Hill - the best of 41 contest going all the way to a deciding rack.

In a close opening session, reigning three time WEPF English 8 Ball champion Hill capitalised from a surprising miss by his opponent in rack 24 to take a 13-11 advantage going into the evening act. There was never more than a gap of two between them.

The multi-talented Hill managed to keep his profit until Shi squared it back up at 16 each.

Possibly due to the pressure of the winning line nearing ever closer, and a winners prize purse just shy of US$100,000, certain passages of play became slightly bogged down and scrappy; although the drama continued to heighten as single racks were traded all the way to 20-20. Hanqing, who dethroned 2015 victor Darren Appleton in the semis, even deliberately fouled his break off shot twice as a tactical move because of not making balls off his break.

​Deservedly, the match did go the distance. Ironically, Hill agonisingly broke dry in the last, and Shi coolly stepped in to run out the rack for the 21-20 win.

The Women's final was another China v England fixture with the same resulting outcome, as Chen defeated Kelly Fisher 17-11.

Chen - like Fisher, usually accustomed to the 9 Ball scene, chalked up the opening trio of racks. Fisher responded, though, levelling it up instantly for 3-3.

The perhaps crucial section of the encounter was the last three frames of the first session. Chen led 8-7, but put daylight between the pair when extending the gap to 11-7.

It would be a lead she maintained, eventually winning fairly comfortably 17-11.

Whilst Fisher might be disappointed not getting the top honours, she can look back with pride - especially after just returning to competitive action after a health lay off.

Many thanks to www.top147.com for permission to use the above photograph.

Written and published by Michael Day on the 22nd March 2016