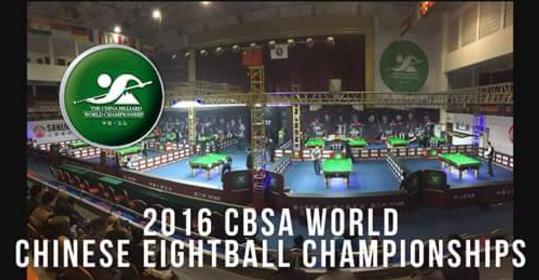 WHO WILL CONQUER IN CHINA? A FINAL PREVIEW

Mick Hill and Shi Hanqing will contest the final of the 2016 Chinese 8 Ball World Championship in Yushan on Sunday.

His journey actually began a week ago, where he qualified into the main draw at the first available opportunity.

In the final stages, he comfortably beat home snooker hero Ding Junhui and Chinese Taipei's World Cup of Pool winner Chang Yu-Lung both 9-3 to advance to the Last 32 - again undefeated.

Now in the straight knockouts, he continued his dominance on Friday with a 13-5 success over Lee Van Corteza (Philippines) and then 13-7 against Zhang Kunpeng (China).

His toughest assignment to date was his tie with another Chinese cueist in Wu Zhenyu during the Quarter-Finals.

Hill led 8-2 in the best of 25 before Wu launched a counter attack, levelling, and then eventually leading 11-10.

But the Englishman swung the momentum back in his favour to take the last three for a 13-11 win.

He started his Last 4 fixture with Li Bo (China) in blistering fashion a few hours later; virtually ending it as a contest when storming to an 8-0 advantage.

Li recovered somewhat, although Hill put the finishing touches to a 15-8 victory.

Despite his obvious ability and natural talent, this is an incredible achievement for the multi-talented Hill; who is making his debut in China.

Hanqing began his bid well, holding four frame profits when 5-1 and 8-4 up.

An under par Appleton managed to hold tight when reducing his deficit to 8-9 and 9-10, but the home representative was roared on as he resisted the comeback and closed out the last five on the spin.

During his route to the championship showdown, Shi beat former two-time World Snooker Champion Mark Williams in the Last 32.

His victory upset British hopes to a repeat of the 2004 WEPF World Final between Hill and Appleton (for reference, Hill won that).

Tomorrow's two session final will be the best of 41 frames.

The winner of the Men's event will pick up a winners purse just shy of $100,000 US Dollars.

It will also be an England v China final in the Women's tournament, as Kelly Fisher will meet Chen Siming at the First High School Stadium of Yushan County.

Both ladies had to endure nervy outcomes in their Semi-Final fixtures.

Fisher, who had to come through the losers side in the International section earlier on in the competition, ousted Yang Fan (China) 13-12 after leading 11-7.

Unbeaten Chen, who has only faced fellow Chinese opposition throughout so far, got the better of Sha Sha Liu 13-11.

Combined, 350 plus players from 29 different countries entered the festival.


Written and published by Michael Day on the 19th March 2016