Reanne Evans didn't drop a single frame on her way to winning the 2016 edition of the Connie Gough Memorial Ladies Snooker Championship.

The main event was played to a knockout format. Evans received an opening round bye before dispatching Laura Evans 3-0 in the Last 8.

She then beat promising teenager Jasmine Bolsover 3-0 in the semi-finals; her World Championship winning doubles partner from last year.

In the final she would meet fellow multiple time winner of this tournament, Maria Catalano.

Despite the 4-0 scoreline, Evans only claimed frames 1, 3 and 4 on the last pink. She also made the day's highest break with an effort of 87 in the second frame.

It was back to back titles for the 30 year old, who won the Eden Masters in December. She will surely have plans on recapturing her WLBSA world title come April.

After near misses in previous events on the circuit recently, Sharon Kaur scooped the Seniors Championship.

Stacey Hancock was awarded 'The Player of the Day'

For more information and results, please visit the World Ladies Billiards and Snooker Association (WLBSA) website here. There is the video of the final on their page here.

Many thanks to the WLBSA for permission to use the above photograph.

Written and published by Michael Day on the 10th February 2016 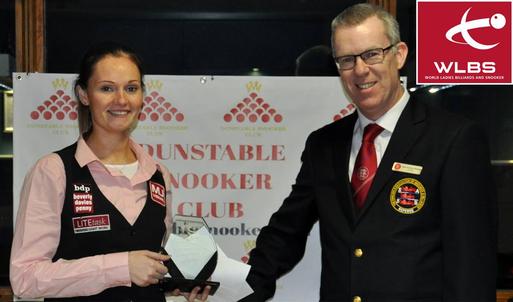